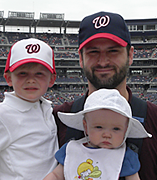 An IC (Institutes and Centers) representative is a postdoctoral-level fellow who serves on the NICHD Fellows Committee on behalf of the institute's fellow population. In general, most institutes have one basic science representative (in our case, this is Kevin) and one clinical representative (NICHD's Fariha Kamran continues to serve in this role for a while longer). Representative appointments last for 12 months and can be renewed for an additional year.

Responsibilities of the IC representative include attending all scheduled meetings, participating on a subcommittee, disseminating information to the fellows in the IC, communicating concerns to the Committee from the IC's fellows, and coordinating the distribution of information via subcommittees. In NICHD our representatives also work closely with the Director of the Office of Education to plan events specific to our trainees.

If you would like more information about serving on the NIH Fellows Committee, please contact Brenda Hanning at hanningb@mail.nih.gov.

A bit about our new IC Representative, Dr. Kevin Francis:

Kevin is originally from West Virginia, where he received his bachelor's in Biology from Marshall University in Huntington, WV. He continued his studies at the University of Georgia veterinary school in Athens, GA, earning a master's in Anatomy. While at UGA, Kevin decided to forgo veterinary school in pursuit of research on neuronal differentiation and stem cell applications. He completed his doctorate in Neuropathology at the Medical University of South Carolina in Charleston, SC, studying neuronal differentiation and functional maturation of neurons from embryonic stem cells.

During his Ph.D., Kevin became intrigued by the transcription factor based reprogramming of fibroblasts to induced pluripotent stem (iPS) cells, pioneered by the Yamanaka group in Japan. As he was preparing to defend his graduate thesis, Kevin learned of Dr. Heiner Westphal's efforts at NICHD in the iPS field. He was particularly impressed by Dr. Westphal's collaboration on a project attempting to use iPS cells generated from patients suffering from a rare malformation syndrome that severely affects the central nervous system. Kevin was happy to join Westphal's group in July of 2009.

Kevin's research projects at the NIH are focused on using patient-derived iPS cells for differentiation assays to study neurodevelopmental disorders and develop drug screening assays. He's hopeful that his postdoctoral project will lead to newly identified compounds that could be moved towards clinical applications for patients.

As the new NICHD rep, Kevin hopes to keep NICHD fellows aware of campus-wide issues that FELCOM is addressing, as well as promote what issues are important to him and other fellows (salaries, health insurance, child care, finding our next job, etc.).

Kevin admits that balancing work and family life has been the toughest thing he's had to learn at NIH. He stresses that learning how to manage your time to maximize your production and efficiency is key.

In Kevin's spare time, he enjoys having fun with his wife, 3-year-old boy and 7-month-old girl, going to the different museums around town, the zoo, and Nationals games on the weekend (Kevin happens to be an avid baseball fan, and he's pretty sure that his son is quickly catching the bug!).

Kevin urges fellows with thoughts or issues on FELCOM activities, the NICHD fellows committee, the NICHD Fellows retreat, etc. to contact him. He's always open to suggestions and thoughtful ideas regarding each of these topics!