If you’d like to learn about a particular person, place, or thing, what’s the first thing you do? Naturally, you Google it. You then scan through hundreds—if not thousands—of links to find the most relevant hit. Given the importance of this search method, most organizations, from large universities down to small businesses, have an online website to showcase their talents. Would you believe, then, that since the inception of online search engines, the NIH Intramural Research Program (IRP) has not had a unified online presence? 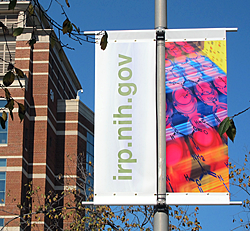 “The need to better promote the IRP has been kicked around for years,” said Director of Communications for the NIH Office of Intramural Research, Christopher Wanjek, who played a major role during the development of the new site. “Various ICs [Institutes and Centers] had nice websites for their intramural program, but there was no central source for information about the NIH IRP.”

NIH leadership spawned the vision for a unified IRP website during the 2008 Scientific Directors’ Retreat. The Scientific Directors (SDs) charged two deputy SDs, Dr. Andy Baxevanis and Dr. Michelle Bennett, with the task to direct the endeavor. For over two years, a trans-NIH committee, multiple subcommittees, and participants during the 2009 “I Am Intramural” information-gathering campaign collectively designed the new IRP site.

For scientists at the NIH, the new site offers a centralized location to highlight the innovative research that is conducted every day. The site also stands to enhance multidisciplinary collaborations amongst institutes, one of the unique and exciting aspects of working at the NIH.

To the non-NIH scientist, the NIH can too easily be viewed as one of Uncle Sam’s pockets, a place where grants are reviewed and money is awarded. A major goal of designing the site is to show non-NIH scientists the depth of research performed on NIH campuses and to inspire collaborations with intramural labs.

For those scientists who are seeking the next step in their careers, the site will hopefully help them select the NIH as their new home. “Many postdocs don't know the wealth of training opportunities here,” said Wanjek. The site aims to reveal this secret.

When I learned that the NIH IRP officially released its first comprehensive webpage, I flashed back to my own search for a NIH postdoctoral position: My husband, an officer in the United States Air Force, received word that he would be stationed in Washington D.C. I was in my final months of grad school in Los Angeles, and my husband’s hop across the country drastically limited my postdoctoral options. Luckily, NIH was within my narrow geographical scope. I Googled “NIH Research.”

After several attempts to find a website that offered information about NIH research at the NIH campus, my short attention span prevailed and I consulted my committee members who gave me a few names to contact to learn about the NIH intramural program. A few months later, I secured a position at a lab within the NICHD. Whether I could find information online or not, my sights were set on NIH, but what about the curious scientist who is unaware of opportunities at the NIH and is searching for the best place to start his/her scientific career? An NIH IRP online presence may make the difference between losing potential candidates and attracting the best scientists in the world---who will hopefully become your intramural collaborators!

In less than 15 minutes of browsing the new IRP site, I learned that the NIH traces back to 1887 and that there are approximately 1100 principal investigators on the NIH campuses. I also discovered quick access to The NIH Catalyst, a newsletter-style publication about intramural research, as well as a “Research in Action” page, which includes inspirational stories about the people who make up the intramural program.

This new IRP site helps put faces to the institutes, transforming a colossal organization into the collective work of thousands of talented and highly motivated people trying to improve the lives around them. I assure you that it’s worth a few minutes of your time checking out what Wanjek has lovingly called the “Hitchhiker’s guide to NIH research.”