Some of the more recent NICHD trainees are making big strides. Graduate students Madhav Sukumaran and Mark Ziats received the 2012 NIH Graduate Student Research Award (NGSRA) at the 8th Graduate Student Research Symposium on January 11, 2012. Both Madhav and Mark joined the NICHD as students at Cambridge University through the NIH Graduate Partnership Program. In honor of their achievements, The NICHD Connection invited them to discuss their studies: 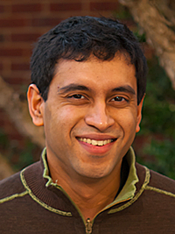 Neurons communicate at junctions, called synapses, where chemical messages bind to specialized receptor proteins on the receiving neuron’s membrane, initiating an electrical response. One receptor subtype (the AMPA-type glutamate receptor) is responsible for fast, point-to-point communication between neurons. Using high-resolution biophysical, electrophysiological, and crystallographic assays, we investigated the role of the AMPA receptor N-terminal domain (NTD), a section of the protein that was previously implicated in receptor assembly. We showed that the NTD plays an organizing role in the initial assembly steps and identified which NTD components controlled the assembly process. Not all AMPA receptor assemblies are created equal, so we explored the physiological and pathological conditions that create favorable and unfavorable receptor populations. Our investigations of the NTD molecular architecture revealed that the N-terminal domain might be more dynamic than previously thought. We also found that the N-terminal domain may have an additional role in the neuron: directly regulating receptor electrical function through potentially novel mechanisms. 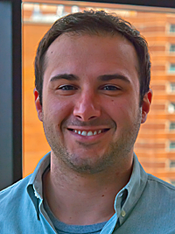 Autism is known to be highly genetic, but the heritability is complex and the underlying molecular mechanism(s) remain unknown. To date, genetics studies in autism have focused on regions of DNA that make protein—but this represents less than 5% of the genome. We looked at differences in the expression of RNAs from regions of the genome that do not make protein (termed long non-coding RNAs or lncRNAs), because they are known to be involved in many fundamental genome regulatory processes. By assessing post-mortem brain tissue from autism patients versus normal controls, we discovered over 200 lncRNAs differentially expressed in autism and showed these are highly enriched for regions nearby genes involved in processes that are aberrant in autism. Additionally, when we compared lncRNA expression within two regions of the brain from a single individual, we discovered that the expression of lncRNAs is less complex within autism brains as compared to controls. This had previously been reported for mRNAs, and our results extend these findings to suggest that less complex transcriptional regulation in general may be a molecular mechanism underlying autism. We are currently following up this work by studying the network-biology effect of a subset of these lncRNAs in neuronal cultures.