Hot Off the Press: Breaking the Circuit 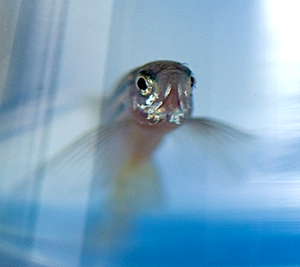 Think of a simple circuit diagram. Straight lines represent wire connections, which are riddled with symbols for resistors, inductors, capacitors, and other devices meant to alter the flow of electricity. A graphical representation of the brain, complete with wired neurons and regulatory mechanisms, would parallel the engineer’s circuit diagram in many ways. This begs the question: is there a way to control the circuitry of the brain, one line or symbol at a time, to decode how the brain controls behavior?

Dr. Harold Burgess of the NICHD is actively answering this question. Dr. Burgess and his team use a process they dub “circuit breaking” to study neural control of behavior in the larval zebrafish. Circuit breaking, as the name implies, involves manipulating the neural circuit in only one or a few places followed by screening for changes in behavior. “Circuit breaking is really getting at the root of what we want to do to understand how very specific parts of the brain control behavior,” said Dr. Sadie Bergeron, postdoctoral fellow in the Burgess lab.

A major challenge to circuit breaking is the need to restrict cellular manipulation to the nervous system. The team uses hundreds of transgenic zebrafish lines to express destructive proteins in a cell-specific manner, but rarely do these transgenic lines restrict expression to the brain. Given that tissues such as heart and muscle are frequently affected in these transgenic fish, destroying these vital tissues can severely impact the interpretation of live behavioral studies in the zebrafish larva.

Dr. Burgess and his team have now described a new method to selectively affect nervous system tissue in transgenic zebrafish experiments, according to their recent report in the December 2012 edition of Frontiers in Neural Circuits. The group incorporated a set of neuron-restrictive silencer elements (NRSE) into the regulatory region of the DNA construct used to make the transgenic fish. NRSEs are short pieces of DNA that suppress neural gene expression in non-neural tissue. The inclusion of NRSE sites increased the recovery of transgenic fish with brain-specific expression patterns by five-fold.

The team then showed that proteins endogenous to zebrafish were likely binding the NRSE sites and inhibiting transgene expression in non-nervous system tissue. “You have to go through step by step, but it’s kind of like anything in science,” said Dr. Bergeron, co-first author of the report. “It’s just always a process until you reach what works best.”

Dr. Bergeron plans to use the NRSE-containing circuit breaking approach to screen the large collection of transgenic lines for neurons involved in modulating the startle response, a characterized set of larval movements after an acoustic pulse. Thanks to marked technological progress, what once seemed an impossible feat—making hundreds of stable transgenic lines in a vertebrate model—has become rather routine in Zebrafish, explains Dr. Bergeron. “Given the simpler nervous system of the larval Zebrafish, we can use [them] as a model to understand the circuitry and genetic components that may be conserved in higher vertebrates.”