Hot Off the Press: Two Is Better Than One 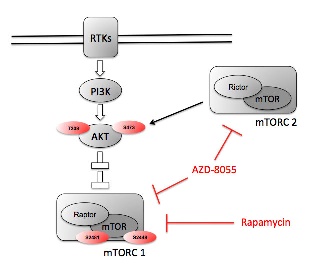 Model of the mTOR molecular pathway. Some drugs, like Rapamycin, only inhibit mTORC1 activity. Other drugs, like AZD-8055, can inhibit both mTORC1 and mTORC2.

There is no cure. These four words are unacceptable to NICHD’s Dr. Karel Pacak, who frequently meets patients diagnosed with metastatic pheochromocytoma or paraganglioma, neuroendocrine tumors arising from the adrenal gland or chromaffin cells outside the adrenal gland, respectively. Patients with pheochromocytoma or paraganglioma often have irregular heart rate and high blood pressure, owing to excess epinephrine or norepinephrine pumped from the abnormal cancer cells. While doctors treat most patients with surgical excision of primary non-metastatic tumors, for some, the tumor metastasizes to other tissues in the body. In this case, there is no cure.

The current chemotherapy for metastatic pheochromocytoma or paraganglioma is effective in about 30 percent of patients. Unfortunately, past attempts to inhibit key processes critical to cell survival have proven unsuccessful or less than optimal. For example, case reports using drugs that affect the so-called mTORC1 protein complex—a logical target in cancer given its involvement in cellular proliferation and homeostasis—report dismal outcomes for metastatic pheochromocytoma or paraganglioma.

Previously, Dr. Pacak’s team found that inhibition of mTORC1 leads to the increased activity of another related protein complex, mTORC2, which is thought to influence cell motility. The old adage that two is better than one may hold true in the treatment of metastatic pheochromocytoma: according to their new report in the February 2013 issue of Endocrinology, targeting both mTORC1 and mTORC2 greatly decreases tumor growth in experimental animal models of metastatic pheochromocytoma as well as in cultured tumor cells from pheochromocytoma patients.

Dr. Pacak’s team, along with their collaborators from Tufts Medical Center, Harvard Medical School, AstraZeneca, and the University of Oxford, tested two experimental drugs reported to be strong inhibitors of both mTORC1 and mTORC2, called AZD8055 and Torin-1, on a mouse cell line commonly used for pheochromocytoma research (stable human cell lines from pheochromocytoma tumors do not exist). When exposed to the drugs, the cultured cells showed less proliferation and decreased cell migration. The team also showed that each drug inhibited downstream cellular activities controlled by mTORC1 and mTORC2.

Encouraged by the in vitro results, the researchers tested AZD8055 on a recently developed mouse model of metastatic pheochromocytoma. The drug significantly reduced the formation of metastatic tumors in lungs. In one last experiment, the team exposed cells taken from the tumors of pheochromocytoma patients to AZD8055 and Torin-1 in culture conditions. Both drugs cut tumor cell survival in half.

“I’m convinced this study will facilitate the use of drugs that will combine inhibition of both mTORC1 and mTORC2,” says Dr. Pacak, who believes clinical trials will start sometime very soon.

This is good news for Dr. Alessio Giubellino, NICHD research fellow and lead author of the study. He arrives to work each morning with an aim to find therapies for all these patients, no matter their metastatic status. “To know that the work we are doing in the lab will benefit the future of many patients, it motivates us every day,” says Dr. Giubellino.

Hopefully, with a little luck and a lot of perseverance, Dr. Pacak will at some point assure all his patients: there is a cure.