Hot Off the Press: Guilty Until Proven Innocent 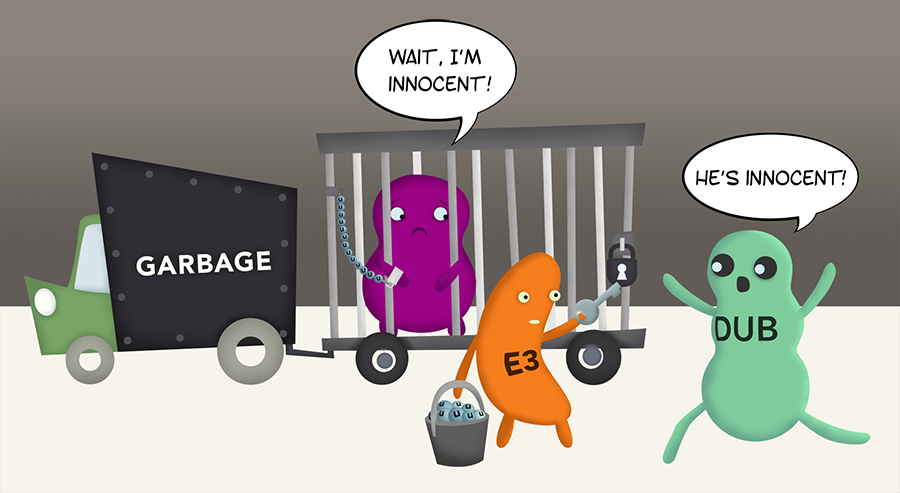 Protein aggregates, or large clumps of unwanted protein, are a common feature of neurodegenerative diseases. Proteins are made of long chains of amino acid building blocks. Once assembled, the amino acid chain wiggles and folds to produce a working protein. But this folding doesn’t always succeed, and sometimes it creates a misfolded, dysfunctional product. These faulty proteins are often rather sticky, and can bind to other proteins, causing protein aggregation and cell damage.

The cell must eliminate these renegade proteins before disease ensues. To do so, the cell employs elaborate “quality control” systems that constantly check proteins for misfolding and mark them for degradation. A specialized class of enzymes called E3-Ligases carries out the marking. If we are to fully understand and treat the disease processes involving protein misfolding, we need to understand how the E3-Ligase successfully discriminates between the good and the bad. One problem: misfolded proteins are prone to aggregation, and difficult to handle in a test-tube, making experiments nearly impossible.

In an interesting twist, NICHD researchers in collaboration with the MRC Laboratory of Molecular Biology in Cambridge, UK, used Human Immunodeficiency Virus (HIV) membrane proteins to study this discrimination problem. Once HIV infects a cell, it hijacks one of the cell’s E3-ligase enzymes to selectively mark a protein called CD4 for degradation. CD4 degradation is crucial for HIV to efficiently produce new mature HIV particles. Earlier work had shown that specific mutations in CD4 allow it to avoid destruction by HIV.  The team realized that CD4, together with its mutant that escapes destruction, provides a model to explore how an E3-Ligase selects proteins for destruction. This model had the advantage of avoiding the complications of working with misfolded proteins. The disadvantage was that these proteins normally operate in a cellular membrane.

The team therefore inserted the proteins into an artificial membrane vesicle, called a liposome, to permit their analysis. With the major technical hurdle out of the way, they could use their simple model system to ask: “How does an E3-Ligase discriminate between the normal CD4 and mutated CD4 proteins?” The answer was surprising…it doesn’t—to any significant degree at least.

The team found in their test-tube system that CD4 was marked for destruction regardless of the mutation. Scratching their heads, they returned their attention to the cell. In vivo, the mutated CD4 lacks the degradation label—a long string of the small protein ubiquitin. The team hypothesized that a protein that removes ubiquitin, called a deubiquitinase (DUB), may be at work. Indeed, when the group introduced a DUB into the test-tube system, the number of ubiquitin labels on CD4 decreased. Importantly however, the decrease was much more dramatic on the mutated CD4.

You’re guilty until you’re proven innocent, according to the E3-Ligase. The team’s data, as well as mathematical modeling, suggests that the E3-Ligase may inspect and mark a broad range of proteins, while the DUB removes this mark. However, a slightly higher affinity of the E3-Ligase for “bad” proteins prevents them from being un-marked by the DUB for slightly longer. The researchers posit that the back-and-forth dance between the E3-Ligase and DUB amplifies the ubiquitin labeling process, slating only the “bad” proteins for the trash. To be sure, the researchers added a DUB inhibitor to the mix and found the mutated CD4 was once again marked for degradation.

The idea that E3-Ligases and DUBs work as a team for protein quality control is completely novel. “If we generalize this kind of idea, the same method may be applied to misfolded proteins,” said Dr. Zairong Zhang, first author of the study. “This result provides a guiding principle: it may be feasible to develop a specific DUB inhibitor to treat diseases caused by protein aggregation.”

Dr. Zhang, former NICHD fellow in the Cell Biology and Metabolism Program, is now an Associate Research Scientist at the Yale University School of Medicine.