The tenth annual Graduate Student Research Symposium is quickly approaching. On January 14, students from the NIH Graduate Partnerships Program will gather to share their thesis work with the NIH community. Our very own graduate student, Anna Kane, was selected for an oral presentation based on her abstract submission. Read a sneak preview of her research below and be sure to mark your calendar to attend her talk! Student oral presentations will be held in the Nature Conference Center, room E1/E2, 9:30-11:00am.

From Factory to Artisan Baker 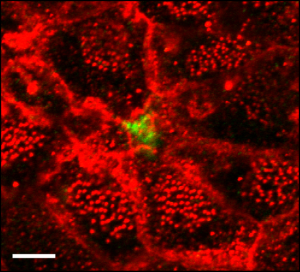 Close-up image of the surface of the mouse neurogenic niche. The neural stem cell is shown in green, with ependymal cells arrayed around it, shown in red. Scale bar: 5um.

I study how the mouse brain makes new neurons. Researchers formerly thought that neurogenesis, the process by which new neurons are made, ended at birth. In the late twentieth century, researchers demonstrated that new neurons are, in fact, produced into adulthood. This discovery provides hope that we can use these cells to replenish neurons that are lost in degenerative disease or traumatic brain injury.

New neurons are born of neural stem cells (NSCs). Little is known about how adult NSCs are controlled, as they differ greatly from embryonic NSCs. During development, embryonic NSCs are production machines, churning out neurons like a factory might make loaves of bread. At birth, this high rate of proliferation stops, and the NSCs resemble an artisan bakery, making just as many loaves of bread (or neurons) as needed. In order to make sure that new neuron production matches the demand, the adult NSCs must assess what is going on in the rest of the brain. They accomplish this by communicating with neighboring cells in the specialized regions in which they reside, called neurogenic niches. These neighboring support cells provide information about the rest of the brain through cell-cell contact and secreted signaling factors.

Since not much is known about the initial steps that assemble the neurogenic niche, my thesis work focuses on understanding the genetic and molecular mechanism of niche establishment. Specifically, I have shown that Gli3, a gene important in patterning and repression of the Sonic Hedgehog signaling pathway, plays a critical role in cell fate determination and organization of the adult neurogenic niche. By learning how the niche is formed, we can begin to understand how adult NSCs communicate with the niche—information that may allow us to manipulate neurogenesis in a living animal.