Hot Off the Press: A Tale of the Unexpected

As is often the case with discovery, you must neglect what you know to learn something new. Drs. Robert Mitchell and Megan Janssen could have mistaken novel data as an artifact if not for their persistence, passion, and ability to see beyond common knowledge. This is their story.

Mitchell joined the Buonanno lab on a brisk March day in 2011. As a protein biochemist, he enjoyed the challenge of deciphering protein interactions. Mitchell’s arrival was a welcome one. His skill set would enable the lab to utilize a newly created antibody aimed at the ErbB4 protein, an important player in neural activity, but whose protein interactions were not well understood.

He set to work. Within the year, he isolated ErbB4 and identified a peculiar binding partner: GABA receptor alpha 1 (GABARα1), a protein that enables inhibitory neurotransmission—the ability for one neuron to prevent signaling by another neuron. In the hippocampus, GABARα1 is localized to interneurons, short neurons that mediate the activity of long-range connections in the brain. Excited by this finding, Mitchell elicited the help of his labmate, Dr. Janssen, a practiced electrophysiologist with experience recording inhibitory currents.

Mitchell used his cell biology expertise to show that activation of ErbB4 triggered a decrease in GABARα1 from the surface of neurons, and Janssen found that ErbB4 activation reduced the amount of inhibitory currents in the cell, a beautiful correlation with Mitchell’s data. Their pilot study was blossoming into a quick-paced project.

ErbB4 is a special protein, called a receptor tyrosine kinase, whose recognized role is to modify the activity of other proteins via phosphorylation. Mitchell and Janssen reasoned that blocking ErbB4 kinase activity should restore inhibitory currents in these neurons, even upon ErbB4 activation. They exposed the neurons to a drug known to block kinase activity, but the drug seemed to have no effect at all.

“It was just trying to take what would seem to be negative data and figure out what was going on,” said Janssen. At this point, they had a decision to make. Accept the initial biochemistry and electrophysiology data linking ErbB4 and GABARα1 as an artifact, or throw out convention and test for kinase independent activities of ErbB4, something that had never been shown for this protein. While their labmates—and they themselves—were skeptical, their curiosity had been piqued.

“I’m a protein biochemist, so I was really excited,” said Mitchell, with a chuckle. “Studying what proteins are doing is what I’m all about, so finding a new function for a protein was pretty exciting for me.” 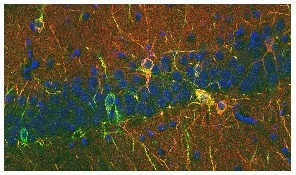 It wouldn’t have been the first time a protein eschewed its kinase activity for a different function. Consider the EGF receptor tyrosine kinase (EGFR), for example. When EGFR is too abundant in cancer cells, the cancer is more aggressive. Researchers attempting to block the EGFR kinase activity found no effect on the cancer’s aggressive nature. To the researchers’ surprise, however, they found that EGFR stabilized a sodium glucose cotransporter. The cancer cells had a selective advantage due to the additional fuel. This novel role did not require the EGF receptor’s kinase activity, a finding with a significant implication: drug design.

For ErbB4 and GABARα1, drug design is a strong motivating factor. Both proteins are implicated in epilepsy and psychiatric disorders, such as schizophrenia. While the biology of these disorders is not completely understood, one explanation is that synchronization of excitatory neurons is impaired.

“Like when you’re reading a book, different parts of your brain communicate over large areas by excitatory neurons, but they’re kept in tune by these local inhibitory neurons,” explained Mitchell. If ErbB4 and GABARα1 are affecting interneuron function in a kinase-independent manner, then there is potential to target this pathway with drugs that avoid kinase inhibition, which is notorious for off-target effects.

Undaunted by their inability to alter neural currents with kinase-inhibiting drugs, Mitchell turned to a transgenic mouse lacking ErbB4 protein in the brain. With the help of labmates, Mitchell spent months isolating ErbB4-negative neurons to record inhibitory currents. At last, Mitchell obtained results showing that ErbB4 was required for inhibitory current regulation.

As more data rolled in, the entire lab got involved. In an elegant experiment, the lab’s molecular biologist generated a virally encoded ErbB4 protein that lacked kinase activity. Mitchell exposed the ErbB4-negative neurons to the virus and recorded inhibitory currents. The “kinase-dead” ErbB4, when activated, still reduced inhibitory currents.

“It’s really basic science. But it is a profound finding,” said Mitchell. They showed, for the first time, that the traditional receptor tyrosine kinase ErbB4 plays a vital role in inhibitory interneuron activity, and it does this completely independent of its canonical kinase activity.

Hypothesis-driven exploration is the cornerstone of research, but how many times has a “failed” experiment actually been an overlooked discovery?  “When you’re figuring out a new mechanism, there are so many more questions than answers,” said Janssen. “That’s what research is doing, just generating questions that haven’t been asked before.”