Congrats to Our NICHD GSRA Recipients 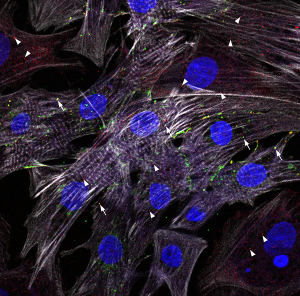 Gap junctions are channels that facilitate metabolic and electrical coupling between adjoining cells throughout the body. In the heart, gap junction localization to the intercalated disc, the specialized interface between two adjoining heart muscle cells, is critical for coordinated contraction. Indeed, in models of heart failure and disease, gap junctions that mistakenly localize to lateral membranes—a process known as lateralization—can cause arrhythmias and sudden cardiac death. To understand the pathogenesis of gap junction lateralization, it is critical to understand how gap junctions are removed from the plasma membrane and degraded.

Multiple studies have implicated clathrin-mediated endocytosis as the means for internalization of these large, double-membrane gap junction plaques. This internalization is reported to require myosin VI, a known motor for clathrin-mediated endocytosis. Once internalized, gap junction plaques cannot be recycled to the plasma membrane and must be degraded. Recent studies have shown that autophagy—an indispensable mechanism for the degradation of large protein complexes, damaged organelles, and protein aggregates—is required to degrade internalized gap junctions.

Our lab has shown that myosin VI localizes to autophagosomes in addition to clathrin-coated pits at the plasma membrane. Without myosin VI, autophagosomes fail to mature and do not fuse with the lysosome. Considering this new role for myosin VI, we aim to determine whether myosin VI plays a role in the endocytosis of gap junction plaques or the degradation of internalized plaques by autophagy—or both. Our results indicate that myosin VI targets gap junctions at the plasma membrane in only a limited fashion. Instead, myosin VI is mainly found on fully internalized gap junction plaques that are also positive for LC3 (the canonical marker of autophagy). Currently, we are trying to determine how the loss of myosin VI impacts the autophagic degradation of internalized gap junctions.

Fishing for Factors in Self-Organization of Biological Systems

In transgenic zebrafish where the lateral line is marked by GFP, we can observe the pattern of neuromast deposition. This image shows a wildtype fish, with neuromasts marked by black arrows and the terminal neuromasts by a yellow arrow.

Zebrafish use a specialized sensory system, called the posterior lateral line (pLL), to sense water movement. The pLL is akin to hair cells of the mammalian inner ear, and it plays an important role in a variety of behaviors, including mating and schooling. Due to its superficial location on the side of the fish, it is an extraordinarily tractable system in which to study cell migration and pattern formation.

The posterior lateral line primordium (pLLp), a small cluster of migrating cells, spearheads the early development of this system. Crawling from the developing ear to the tip of the tail, the pLLp deposits rosettes of cells that will develop into the organs of the pLL. These organs, known as neuromasts, contain mechanosensory hair cells. Displacement of these hair cells communicates the direction of water movement to the fish’s central nervous system.

Two signaling systems work in concert to organize neuromast formation in the pLLp: Wnt and fibroblast growth factor (FGF). The balance of Wnt and FGF signaling is a critical determinant of the rate of neuromast initiation and deposition. Many diffusible factors, including Wnt and FGF ligands, associate with heparan sulfate proteoglycans (HSPGs) found in the extracellular matrix and on the cell surface. Differential interactions with HSPGs can influence how far signaling factors diffuse, which cells respond, and how effectively they can activate cell surface receptors.

Our results indicate that 3-O-sulfation, a very rare and specific modification of the heparan sulfate chain, is activated by Wnt signaling and important for regulation of FGF-mediated neuromast formation and deposition. Meanwhile, a loss of heparan sulfate chains altogether results in expansion of Wnt signaling in the pLLp and a decrease in the migration speed of the pLLp. These results indicate that HSPGs are critical for balancing Wnt and FGF signaling within the pLLp, thereby regulating pLL morphogenesis.

Ultimately, this research will determine the mechanism of how interactions with HSPGs regulate signaling networks and morphogenesis in the pLLp.  Understanding the regulatory network that coordinates morphogenesis of the zebrafish lateral line system will ultimately contribute to a deeper understanding of the self-organization and emergent behavior of biological systems.