The Arts: Illustrating DNA in a Cover Graphic

In September 2012, Dr. Karl Pfeifer reached out to me with a request. He needed a compelling graphic to summarize his research, in an attempt to get the cover for Nucleic Acids Research. I enlisted the help of Amy Ton, an NICHD IRTA and talented artist interested in working on science graphics. We met together with Dr. Megan Sampley, a fellow in Dr. Pfeifer’s lab and a co-author on the paper.

The first thing to do when starting a graphic is to sketch a few ideas on paper. While digital tools can certainly help to flesh out ideas, using pencil and paper has a psychological effect of being more malleable and less finished. In my experience, people are more likely to share input and contribute their ideas before moving to a digital format, where changes can sometimes be more time-consuming to implement.

To start, we thought about the composition of the graphic as a whole, in addition to reducing the graphic to the minimal amount of technical information to be included. We concluded the following: we’d represent a set of genes and how they associate differently on nonrealistic, colorized DNA contributed from both the mother and the father (pink and blue) as a simple schematic. We needed to have the DNA appear close in perspective to cue the viewer in on the fact that it was DNA, but then reduce it to a simple line to depict the interactions among the various genes.

Rendering this graphic according to the sketch presented a couple of challenges. How could we easily create DNA in Illustrator? Once created, how could we portray the DNA with a sense of depth without losing the 3D appearance of the DNA? There are several plugins for the line tool in Illustrator, but these are meant to be used on a flat plane. The first iterations of the graphic failed to look realistic because of this, so we needed to find a workaround to add perspective.

We started by creating a strand of DNA in Illustrator to create a straight line that was larger on one end than the other (see figure A).  We exported the image to Photoshop, where we “transformed” segments in stages, giving it the perspective we lacked earlier. To accomplish this, I selected everything, except for one “turn” of the DNA (see figure B). I then transformed by “grabbing” the left handle and “squishing” the DNA until the dimensions of the right segment looked proportional. I then deselected the rightmost segment and repeated the same process until the entire DNA strand had the correct proportions. Using this process, the first segment was transformed one time, and the smallest segment on the left would be transformed 27 times (see figure C). This created an image with the proper perspective, which we could then “bend” by using the “puppet-warp” tool in Photoshop (under the “edit” menu). We first “pinned” down the right side of the graphic (see figure D), before adding other points, which could then be moved to warp the image (see figure E).  This worked well, except that it caused some segments of the graphic to disappear, so manual “painting” with the brush tool in Photoshop was required to touch up the graphic. 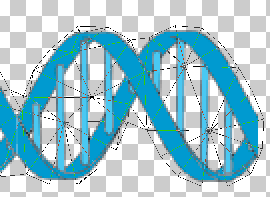 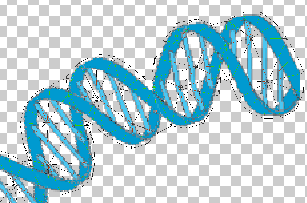 Once we had our DNA, we changed the color by adjusting the hue to produce pink and blue versions to represent DNA that was contributed by the mother and father. We connected a curved line to the end of the DNA, added the other elements, and exported at 300 DPI for submission to the journal. The rest is history!

The image appeared in conjunction with “Promoter cross-talk via a shared enhancer explains paternally biased expression of Nctc1 at the Igf2/H19/Nctc1 imprinted locus,” Nucl. Acids Res. (2013) 41 (2): 817-826 doi:10.1093/nar/gks1182. You can visit the following link to view the final image on the Nucleic Acids Research website: http://nar.oxfordjournals.org/content/41/2.cover-expansion.