Hot Off the Press: Chronic Stress Linked to Close Quarters 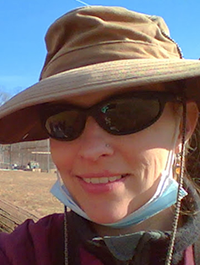 High population density may lead to chronic stress, according to a new study by Eunice Kennedy Shriver National Institute of Child Health and Human Development (NICHD) researchers. Their finding offers a possible explanation as to why higher population densities link to negative health outcomes across a variety of animal species.

Signs of chronic stress in animals include slow growth, poor immune function, an inability to reproduce, and in some cases neuron damage. The body responds to stress with a release of hormones, called glucocorticoids, into the bloodstream. When stress is short-lived, a feedback loop signals the brain to stop producing these hormones. But when stress is chronic, some of the hormones, in particular cortisol, remain in the bloodstream prolonging the stress response. Several research groups have shown that diverse animal species have higher glucocorticoid levels when living in dense populations.

“Population density can have potentially deleterious effects on developmental outcome and particular health issues for humans and animals alike, “ said Dr. Amanda Dettmer, postdoctoral fellow in Dr. Stephen Suomi’s lab and lead author of the study. One reason it’s been difficult to test the link between population density and chronic stress is because researchers have traditionally collected cortisol from blood or saliva, a measure of acute stress. In 2006, Dr. Jerrold S. Meyer’s lab at the University of Massachusetts Amherst developed a method to extract cortisol from hair samples. “Rather than being a snapshot of what the individual is going through right now, it’s more of a panorama of what the individual has been through over the last several months,” Dr. Dettmer said.

In collaboration with their colleagues at the University of Massachusetts, Dr. Dettmer measured hair cortisol levels in two populations of animals: one high and one low density. The high-density group resided in an indoor-outdoor enclosure containing multiple perches, swings, and enrichment devices. In contrast, the low-density group lived in a five-acre outdoor enclosure. The high-density living conditions linked to higher levels of hair cortisol across all ages. The results suggest that individuals in high-density populations experience chronic stress to a greater extent than those in less crowded conditions.

This is the first study to show that increased population density links to higher levels of hair cortisol, indicating chronic stress. The team published their work in Psychoneuroendocrinology. While the study shows a correlation, not causation, Dr. Dettmer hopes to identify what factor in high-density living conditions contributes to increased stress in individuals.