Earning Your Stripes as a Scientist-in-Training 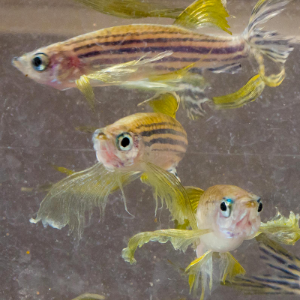 There is never a single way to study a question, and each method used to come up with an answer will have its own pros and cons—a valuable lesson for a scientist-in-training.

I study the posterior lateral line (PLL) to understand molecular factors in the self-organization of biological systems. Often compared to the mammalian inner ear, the PLL is a sensory system that zebrafish use to sense water movement. This system comes into play in a variety of behaviors, including mating and schooling. Due to its superficial location on the side of the fish, it is an extraordinarily tractable system in which to study cell migration and pattern formation.

The posterior lateral line primordium (PLLp), a small cluster of migrating cells, spearheads early PLL development. Crawling from the developing ear to the tip of the tail, the PLLp deposits rosettes of cells that will develop into the organs of the PLL. These organs, known as neuromasts, contain mechanosensory hair cells. Our lab is interested in how intercellular signaling regulates cell migration and fate determination during the early development of the PLL. In particular, I study how such signals can be regulated by heparan sulfate proteoglycans (HSPGs).

During the 2015 NIH Graduate Student Symposium, I reported that 3-O-sulfation, a very rare and specific modification of the heparan sulfate chain, is activated by Wnt signaling and important for regulation of FGF-mediated neuromast formation. Meanwhile, a loss of syndecan4, one type of HSPG core protein, results in slow PLLp migration, as well as slow neuromast formation. These results indicate that HSPGs are critical for balancing Wnt and FGF signaling within the PLLp, thereby regulating PLL morphogenesis.

However, some of my conclusions are based on phenotypes that I observe after morpholino-mediated knockdown of my target genes. Morpholinos, short antisense sequences that bind to target RNA, are common to zebrafish research because, until recently, it has been difficult to generate targeted mutations. Unfortunately, scientists in the field are learning that morpholinos aren’t nearly as reliable as assumed. Yes, they’re good at knocking down target gene expression, but they also cause off-target effects that can supersede the effects of the gene knockdown.

A number of mutant lines have been generated that do not show a phenotype anywhere close to the morpholino-induced results. Morpholinos seem to be particularly troublesome for PLL research—researchers have shown that multiple morpholinos induce several stereotypical off-target phenotypes. I actually see some of these worrisome phenotypes in my “morphants.”

But a new era has dawned in zebrafish targeted genome editing with the advent of the CRISPR/Cas9 protocol. The CRISPR/Cas system is a prokaryotic immune response that provides protection from foreign genetic elements.  Complementary CRISPR RNAs identify genetic foreign invaders and chop up the sequences with Cas endonucleases.

Researchers have co-opted this system to induce genetic mutations in a variety of eukaryotic model systems, including C. elegans, Drosophila, and zebrafish. We design CRISPR guide RNA to target a gene of interest and, once it binds, Cas9 protein attaches to its binding site on the 3D structure of the CRISPR. The Cas9 creates a double-stranded break in the DNA, and the error-prone system of double-stranded break repair introduces either a deletion or insertion in the gene. The system is incredibly efficient, making targeted zebrafish mutants easier than ever to generate.

At present, many eager zebrafish researchers are making CRISPR mutants, including me. For the past few months, I’ve been injecting CRISPR guide RNAs into zebrafish embryos and screening for germline transmission of the induced mutations. I’m on my way to having several mutant fish lines, including a double mutant.

For now, I’m thinking of my morpholino-based results as preliminary and hoping that I see morpholino-induced phenotypes replicated in my mutants. Even if I don’t, this experience has been an important lesson in how to approach research questions and problem solving as a scientist. It’s worth repeating: there is never a single way to approach a question. And sometimes, when newer technology comes along, a seemingly answered puzzle becomes, once again, a mystery.