Scientist as Scholar: Then and Now 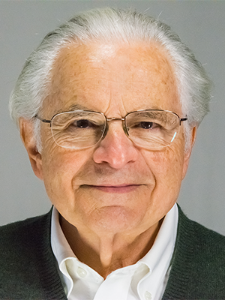 In the summer of 2006, Current Biology published an interview with Dr. Igor Dawid, now head of the Section of Developmental Biology, NICHD. During the interview, Dawid discussed his entrance into biology following World War II and his outlook on the “biological research enterprise.” Anyone who reads the interview will find that Dawid’s keen insight, humble attitude, and gentle humor make you feel as though you just chatted over a cup of coffee together. The take away message from the chat? That he’d do it all over again.

Now, ten years later, we pick his brain once more. In a Q&A with The NICHD Connection, Dawid offers his thoughts on success in research, his new favorite papers, challenges for current trainees, and a few other “scholarly” tidbits for our consumption. Enjoy!

Q: Do you think there is a key to success in research, and maybe more importantly, what do you define as success?

A: I don’t believe there is one key to success in science, but there are several factors that contribute. In no particular order, (i) aptitude does matter; inclination to logical thinking, intellectual curiosity, tenacity and flexibility in the “right” combination, and commitment to a research career all help. (ii) Luck helps as well, maybe better said, being at the right place at the right time. Of course, good judgment can get you to the right place as well. If you Google “luck favors the prepared,” you get lots of hits. Still, having the opportunity comes before seizing it. In looking back at my own career I always feel lucky to have had good opportunities. (iii) Picking the right subject is another important factor, although one could say that the first two factors already include this one.

Defining success altogether is more philosophical than I care to tackle. In a purely professional sense, I guess one could say that achieving a goal you set for yourself would do it. But what goal to set? Is it too low, then you lack ambition, and some ambition is needed and should probably be an item in the paragraph above. Point it too high (Stockholm or bust) sets up the vast majority of us for failure. So perhaps I should say that picking ambitious but realistic goals is another factor needed to achieve success.

A: Most people, especially by 2016 rather than 2006, will say harder for sure, but is anything easier? I tend to agree that overall pursuing a research career got harder since the 1960’s, and even since 2006. What got harder is obvious, it is more difficult to get a job, and the next paragraph will speak to this as well. What might have become easier is to choose a productive line of research. The vast expansion of technological capabilities in the half-century that I witnessed in the biological sciences means that good work can be done by many researchers in many fields. Fifty years ago, technical limitations meant that you could not approach most questions in biology you might have liked to investigate, and choosing a line of research was more daunting than it is now.

Q: In the same interview, you said that a problem in the biological research enterprise is the ratio of good postdoctoral researchers to available long-term employment. Do you think that has improved, stayed the same, or worsened in the past ten years? Any ideas?

A: I saw this as a problem in 2006, and it surely has gotten more serious since. It is also more widely discussed, testifying to its increasing impact on the field. By 2014 four very prominent colleagues published a perspective to highlight the problem and make some suggestions (Alberts et al., PNAS 111: 5773-5777). If I may be a bit irreverent I would say that the authors have been more successful in outlining the problem than finding solutions—but then, in the realm of societal issues, that is par for the course. And needless to say, I would not try to claim that I can offer a solution.

Q: What do you see as new challenges for NICHD trainees?

A: I am not sure there is a unique set of problems facing NICHD trainees compared to their peers elsewhere. It is good that postdocs have the opportunities to learn about alternative careers, get advice on how to write a grant and how to look for a job. But the enhanced mentoring activities should not go overboard—sometimes it feels that the need to demonstrate that mentoring is happening outweighs the substantive interactions between scientists. I hope that’s a misimpression.

A: Much has happened since 2000. The human genome sequence is surely one key event, although choosing one paper to represent it would be difficult. Another key event is the invention of model system-independent genome editing. The favorite platform has definitely settled on CRISPR/Cas9. Again, picking one key paper is not easy, the first paper I read on the subject is Jinek et al., Science 337: 816-821, 2012. I’ll pick this as my favorite modern paper.

Q: If you had a time machine that could travel to any scientific event, past or future, what discovery would you use the time machine to witness?

A: Well, that’s not a question I had ever thought about. It would be nice to go along on the HMS Beagle on its voyage of discovery, except that I am soft and the accommodations were pretty Spartan. So since this is fantasy I’ll have a cabin from a modern luxury cruise ship, including kitchen service, attached to the Beagle so I could come along in comfort. Of course, my conscience would kill me to live it up while poor Charles has to make do with tight quarters—but you get the idea.

Q: What are your favorite fiction and nonfiction books?

A: A brief comment on my background will help explain these preferences. I spent my teens and half of my twenties in Vienna, studied there, and culturally have retained an affinity for Vienna, Central Europe more generally, and the early to mid-twentieth century. In this context my favorite fiction book is the collection of short stories, or novellas, by Thomas Mann. Not every one is a masterpiece, but several are. Probably best known to an American audience might be “Death in Venice,” made into an atmospheric 1971 movie, and “Tristan,” a story you might call a theme and variations treatment of Wagner’s “Tristan und Isolde.” I re-read these stories about every decade of my life.

The nonfiction book I’ll mention is the biography of Ludwig Wittgenstein by Ray Monk. Not that I am that much into philosophy, and even less do I claim to have digested Wittgenstein’s thinking. But he was a fascinating personality, born in Vienna and living a large part of his life in England through terrible but interesting times. The book is very well written, with understanding and balance, and is altogether a fine read.