Studying the neural control of behavior is a challenge. Researchers must consider an animal’s environment, past experiences, and motivations. Work in relatively simple organisms, for example the invertebrate C. elegans, has teased apart the neural circuitry of highly stereotyped behaviors, like foraging. But in mammals, very little is known, “and that’s surprising given just how important behaviors like this are,” said Dr. Eric Horstick, who studies the molecular mechanisms underlying animal behavior.

Horstick, a postdoctoral fellow in the NICHD Section of Behavioral Neurogenetics, came to the NIH with a goal to characterize genes that control behavior in vertebrates—information that could advance therapies for behavior-related diseases in humans. He joined the lab of Dr. Harold Burgess, whose earlier work studying light-mediated behaviors in larval zebrafish would set the stage for Horstick’s studies.

For more than 20 years, labs have used a classic behavior paradigm in fish called the visual motor response (VMR). Investigators place individual larval zebrafish into separate wells of a multi-well plate and record larval movement in light and dark conditions. With the onset of darkness, the fish move rapidly for several minutes in a highly stereotyped response. 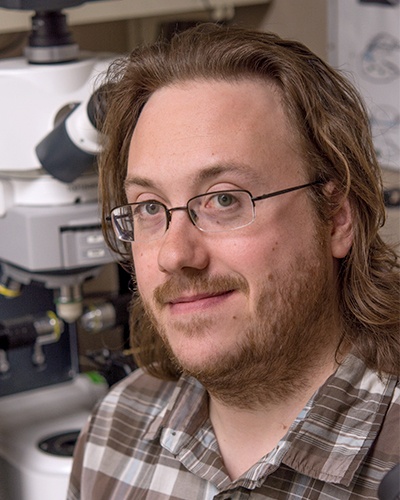 As Horstick considered ways to examine if the movement was random or spatially patterned, he realized that the multi-well set up restricted the type and resolution of collectable data. According to Horstick, he “blew it up.” He placed individual larva in chambers measuring 400 square millimeters, a roomy space for a 3mm creature. This time, when the lights went out, the zebrafish initiated a slow, descending spiral, not the rapid motion typical of VMR. Eventually, the zebrafish transitioned from a spiral movement into an outward, exploratory pattern.

“As soon as we gave them more room, something much more complex started to emerge, a stereotyped behavior,” said Horstick. “Beautiful patterns are always an attractive component in research.” At this point, Horstick left his comfort zone of molecular neuroscience to delve into the ecology literature, where he found similar patterns throughout the animal kingdom. His results were consistent with search and foraging behaviors observed in mammals all the way down to flies and worms. They had stumbled upon a highly conserved behavioral paradigm that had been masked by the confined environment common to VMR studies.

Horstick paints an example of this behavior in humans. “The scenario I like to describe is when you walk out of your house and reach for your keys, but they’re not there. Take a moment and picture what you do. You normally stand there, move your head, scan the environment, and step around in a circle just like our fish do, just like what worms do, just like what flies will do when they’re searching for something that they can’t find immediately. So even us, when we’re not conscientiously aware of it, we perform these highly engrained patterns of behavior.” 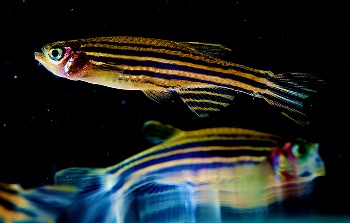 Horstick now possessed an untapped treasure trove of behaviors with the upgraded VMR assay. Using the wealth of techniques available in zebrafish—including established mutants and CRISPR technology—Horstick found that zebrafish required eyesight for the restricted spiral pattern during VMR. But two systems stood out for their involvement in the transition to outward movement: somatostatin signaling and deep brain photoreceptors.

Somatostatin, in particular, piqued Horstick’s interests. The small peptide hormone is a potent neuromodulator in humans. And based on work in mammals, somatostatin serves as a regulator of growth hormone output and a modulator of behavior states, such as anxiety. Horstick ponders, “Is somatostatin correlated with feeding drives? This could have true relevance to human conditions in terms of obesity, drive to eat, drive to seek food—maybe with somatostatin we could start opening up some of those angles?”

In the near future, Horstick hopes to gain insight into the somatostatin neurons involved in this behavior to elucidate the circuitry further. He questions how these neurons tie into the input of sensory information to then modulate downstream motor output. But Horstick’s goals don’t stop there. His big question: “Is this peptide tuning not just this behavior, but behavioral states as a whole?”