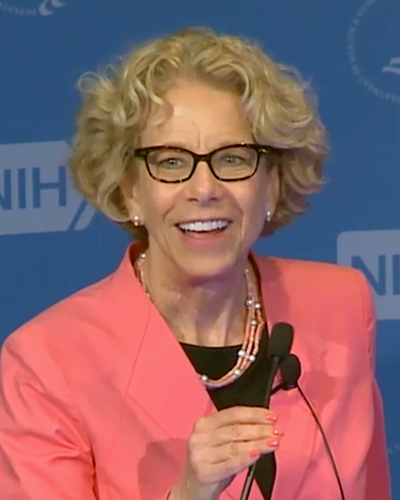 As part of the summer lecture series from the NIH Office of Intramural Training and Education, the NICHD Director Dr. Diana W. Bianchi presented on the power of genomics in noninvasive screening for prenatal genetic conditions. Her talk, entitled “Noninvasive Prenatal Genomics: A Success Story in Genomic Medicine”, focused on how disruptive technologies have shaped the field of prenatal diagnostics. Dr. Bianchi is a pediatric medical geneticist, specialist in neonatal-perinatal medicine, and the principal investigator of a research group in the National Human Genome Research Institute. She has led research efforts on noninvasive prenatal detection of trisomy 13, 18, and 21 (commonly known as Down syndrome) and their treatment in utero.

Noninvasive prenatal testing uses a simple blood draw from a pregnant woman, followed by massively parallel sequencing to screen for genomic abnormalities in a fetus. In 1979, Dr. Bianchi and her mentor, Dr. Leonard “Len” Herzenberg, repurposed fluorescence-activated cell sorting (FACS) to detect the presence of cell-free fetal DNA from the mother’s blood, to identify aneuploidies (an abnormal number of chromosomes) in a noninvasive way. During her talk, Dr. Bianchi touched on part of the inspiration for her life’s work: Michael Herzenberg, her mentor’s son, who was born with Down syndrome in an era when neurological disorders were not understood and no prenatal screenings were available.

She describes how 10 percent of a pregnant woman’s blood sample is fetal, and through deep-sequencing and new bioinformatics algorithms, geneticists can estimate the abnormal amounts of sequence that align in chromosomes 13, 18, or 21. This test is so often correct, that it has been misinterpreted as a diagnostic. Dr. Bianchi emphasized that a negative result is 99 percent accurate. However, a positive result from this screening still needs to be confirmed through amniocentesis or chorionic villus sampling. Moreover, Dr. Bianchi added that false positive results have provided incidental findings that have led to discoveries in fetal-placental biology and even the detection of undiagnosed cancer in the mother.

Non-invasive prenatal screening is now offered as a routine test in high-risk pregnancies, and the goal is to make it as accessible as possible.

From the infancy of karyotyping to the current use of genomic sequencing, Dr. Bianchi has been at the edge of discovery, providing an exciting vision for the future. In fact, her current research goes one step further. Although the work is still preliminary, Dr. Bianchi and her team are addressing the possibility of early treatment for Down syndrome in the neuronal developmental stage of the fetus, in utero. She screened FDA-approved drugs that may have an impact in the pathways of neuronal development, are harmless for the mother and baby, and that can help restore some of the neuronal activity that is lost in Down syndrome patients. Her screening results are encouraging, and her group is advancing to behavioral testing of promising drugs in mice.

Overall, Dr. Bianchi’s talk generated enthusiasm about the bright future of medical genomics among our summer students.  These new technologies can be “disruptive” and change how obstetricians are trained, while evolving prenatal testing to keep up with modern medical genetics. “Just like Google or Airbnb changed how research and booking a room works, noninvasive prenatal genomics is altering the obstetrician profession around the world,” said Dr. Bianchi.