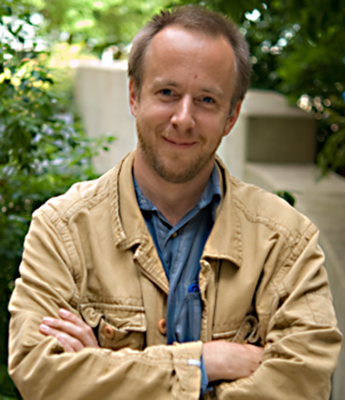 Jason Riley, PhD,
from his days in the Gandjbakhche lab

Jason Riley, PhD, is a chief technical officer (CTO) at Archeoptix Biomedical, a start-up company out of Kingston, Ontario, Canada. Jason founded Archeoptix Biomedical to commercialize and employ his patented technology—a near infrared (NIR) device that detects bleeding in the brain.

Jason began the research and patent process for this technology during his postdoctoral fellowship in the NICHD laboratory of Dr. Amir Gandjbakhche, where he studied bio-photonics for seven years. Like many scientific careers, Jason’s path to CTO of a start-up was not straight forward or easy. Read the Q&A session below to learn about challenges that Jason faced over the years, and the well-earned resiliency that followed.

In the spirit of our resiliency theme, can you describe your path from your first interest in science to where you are now, and any failures or obstacles you encountered along the way?

For my first degree, I completed a little over a year of biochemistry and genetics. Due to personal events, including a death in the family, being in a car wreck, and, well, being a student, I didn’t do so well. I quit for the first time. The next year I restarted with an interest in computers. My advisors thought I wouldn’t be good at computer science, so I chose electronic and electrical engineering. However, I also completed an elective in artificial intelligence, which was instructed by the guy who said I couldn’t do computers. I was top of the class…

LESSON: Don’t let anyone ever tell you that you can’t do it.

Three years later, I had earned a 1st class honors with a prize in instrumentation and control engineering.

I moved into programming for financial databases. I turned down IBM—even after they increased their offer—over a girl (actually, a good decision for reasons to do with their HR policies at the time). Turning down IBM was NOT A FAIL—although some said it was.

After that, I completed a master's at University College London in computer vision, image processing, and simulation. I got a kick in the teeth at the end: I didn’t receive a distinction, as my own advisor downgraded my project (I’m not supposed to know that). I ended up receiving an award for it, though, which funded my PhD work. I went on to complete my PhD training with that advisor for five years. It should have been three years. I nearly quit a bunch. But, I earned the PhD and moved across the Atlantic to the NIH.

After a seven-year postdoc at NIH, I moved on (a dark few months followed). Let’s be honest, there wasn’t the money to keep me in the lab, even though I was wanted. I moved to Canada. By now I am married with three kids.

I met a guy to talk about making the device that I invented at NIH. Well, he was like the third or fourth guy—we hit it off.

The rest is “history.” I’ve nearly quit several times. Start-ups require being prepared for horrible uncertainty, but my four kids are relatively happy and well-adjusted despite all that. Did I fail over the years? Yep—but without the failures, I wouldn’t be near delivering an exciting new technology to market.

During your career journey, what was your biggest obstacle, and how did you get through it?

Biggest obstacle? Myself. I am my own worst enemy: self-doubt, overconfidence (yes, I have both), and just wanting to please everyone all the time. Sometimes you can't…and you have to know when that is okay.

Yes, so I mentioned before that I did quit one degree. Since then, I’ve quit a career in finance, because I wanted something more related to research. Now I’m back in industry, because, well it’s a good fit.

In all these times, I’ve been called a failure more than once. Have I failed? Oh yes, I have. But the truth is that you must get back up. You must focus on what motivates you.

An example is that I quit smoking when I started dating my wife. I was a 20-plus-a-day man for over a decade, and I quit literally overnight. Why? Because her mother died from lung cancer when she was 12. I found a reason, THE reason. Having one real reason to get back up is what it takes. Now it’s my boys’ future. I will always get back up. Does it sound trite, yes, but it’s true. I’d quit smoking before with many “good” reasons, but always started again, after weeks, months, and once after two years. This time I’ve been without smokes for 12 to 13 years.

What was applying for a patent like? Did you experience any failures while getting your patent granted? If so, what happened and how did it resolve?

Applying for patents is grueling. The one I worked on while at NIH has just been granted after many years. I have a few others now, and they’re also nearly complete. But the truth is, you will be asked to prove stuff that makes no sense. I once had to explain that they were literally asking me to patent a computer mouse as part of my patent. I was like, “Sure, and do I get royalties from every mouse sold after I do that? Because—SWEET!”

There will be conversations with the United States Patent and Trademark Office where you receive vaguely related research articles, or patents that are only remotely related to yours, and you'll have to justify why your work is unique.

What has been your most important life lesson?

Hmm…probably see the smoking story above: Have one reason, the right reason to do something, and you will succeed.

If you could talk to your past self, what point in time would you pick, and what would you say?

Hey 12-year-old me! Don’t drink and do drugs. Honestly, I can think of a lot of things to say to myself at various times in my life, but that is first, closely followed by talking to me at the early days of my start-up company. “Don’t overpromise, and don’t compromise for a result to try to make the investors happy. Pick the right partners, pick the right investors, and you won’t need to.”

What are your personal dreams/goals for your future?

Finish the device, save one life, and provide for my boys. I mean, if the device saves more than one person, great! But it only needs to save one life to make the journey worth it.

For fellows who are going through hardship or perceived failure right now, what would you say to them over a cup of coffee?

In all honesty, I’d say to follow your dreams, because people will tell you they aren't real. The reality is that we will get knocked down in life and must stand back up again. It is 100% OK to fail. My darkest secret? I have been unemployed; I have been a painter/decorator; I have been an administrative assistant; I have been a laborer. I do have three degrees, and I'm still standing because I don't look back or down on those positions. They were things I had to do to get by, and some happened when I had one, two, or even three degrees. Today, I have a six figure salary; tomorrow, I may be working minimum wage.