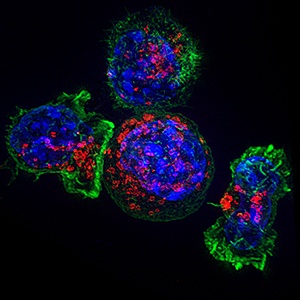 I study the cells of the immune system that are responsible for hunting down and killing cancerous and virus-infected cells in the body. These cells have been aptly named cytotoxic T cells (CTL). CTL kill their targets through the polarized secretion of organelles called lytic granules, which contain an array of cell-damaging proteins.

CTL are serial killers, meaning that they can kill multiple cells, one after another.  The lytic granules within CTL are the ammunition that these cells use to destroy their targets. This ammunition is very potent. It takes only one or two lytic granules to destroy a target cell. In order to kill multiple cells, CTL must regulate the number of granules they secrete, saving ammunition for the next target. But how CTL regulate their secretion is unknown.

The cortex of mammalian cells consists of a thick layer of branched actin, which has been proposed to act as a barrier to secretion. I hypothesized that CTL manipulate the density of this actin barrier to control the number of lytic granules released toward a target cell.

Using high-resolution, live-cell imaging techniques on fluorescently labeled actin and lytic granules in CTL, I observed that the density of actin at the interface between the CTL and a target cell is greatly diminished. I also observed that just after granule secretion, a wave of actin polymerization emanates from the secretion site, increasing the density of actin covering the interface. This actin “wall” appears to prevent further granule secretion, as lytic granules that are visible close to the plasma membrane do not fuse for release.

When we treated cells with latrunculin A, a small molecule which destabilizes actin polymers, the actin “wall” disappeared, and granules immediately and continuously fused with the plasma membrane. This data suggests that secretion of a few lytic granules induces actin polymerization at the CTL-target interface, which acts as a barrier to prevent further secretion. In this way, CTL preserve “ammunition” to use on other virally infected or tumorigenic cells.