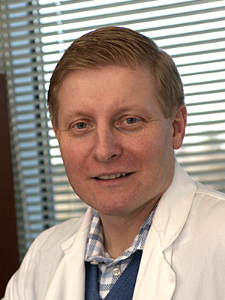 Pheochromocytoma/paragangliomas have a high degree of heritability with 40% of cases carrying a germline mutation. Throughout the years, there has been more than 20 susceptibility genes identified. We accept patients with any pheo/para-related mutations into our protocol. We also may be able to provide genetic testing to immediate family members of patients known to have a mutation in these genes.

More pheo/para-related genetic information can be found below.

DNA is the molecule that contains the information responsible for much of our development, physical characteristics, and bodily functions. DNA can almost be thought of as an instruction manual found in all of the cells within our body, telling them what to do and how to behave and grow. Information on DNA is contained in units called genes. If DNA is the instruction manual, genes are the words. These genes are translated by the cells into proteins, which actually carry out the functions specified in the DNA. A mutation is a change in one letter of the DNA, like a typo in a word. Since the instructions are different, the protein is often altered, which often affects its ability to function properly. This can have detrimental effects on the cell, which can lead to various symptoms and conditions, depending on the mutation and gene.

Gene mutations occur in two ways:  they can be inherited from a parent or acquired during a person's lifetime.  Mutations that are passed from parent to child are called "hereditary" or "germline" mutations (because they are present in the egg and sperm cells, which are also called germ cells).  This type of mutation is present throughout a person's life in virtually every cell in the body.  Mutations that occur just after fertilization are called "new" or de novo mutations. De novo mutations may explain genetic disorders in which an affected child has a mutation in every cell, but has no family history of the disorder.

Mutations in the VHL gene lead to Von Hippel-Lindau (VHL) syndrome, which affects approximately 1 in 36,000 people. VHL syndrome is characterized by the development of tumors in various locations in the body. VHL syndrome is classified into two types, type 1 and type 2. Patients with VHL type 1 do not develop pheochromocytomas. VHL type 2 is further divided into type 2A (low risk for pheo), type 2B (high risk for pheo), and type 2C (the only symptom is pheo).

Neurofibromatosis type 1, or von Recklinghausen's disease, is a fairly common disorder, affecting approximately 1 in 4000 people. NF1 has various symptoms, including the development of tumors, but is usually diagnosed at a young age based on the presence of café au lait spots on the skin. The association of NF1 with pheo is fairly small.

Multiple endocrine neoplasia type 2 (MEN2) is caused by mutations in the RET gene. It affects approximately 1 in every 40,000 people, and can lead to tumors in the endocrine system, including pheochromocytoma. Patients with MEN2-associated pheo often lack hypertension or other symptoms, and often present with intra-adrenal, bilateral, and/or malignant pheos.

Succinate dehydrogenase is a protein associated with metabolism, specifically to the electron transport chain and Krebs cycle. It is located on the inner mitochondrial membrane and is made up of four subunits, SDHA, SDHB, SDHC, and SDHD.

Typically, patients with homozygous SDHA mutations lead to a rare neurological disease, known as Leigh's disease; heterozygous carriers do not seem to be affected.

Mutations in SDHC are much rarer than those in SDHB or SDHD. Patients with SDHC mutations more commonly have head and neck paragangliomas, though some patients with sympathetic paragangliomas have also been identified.

Mutations in SDHD were the first SDH mutations to be linked to pheochromcytomas/paragangliomas. Patients with SDHD mutations typically present with head and neck paragangliomas. SDHD mutations seem to be maternally imprinted, meaning that if the mutation is inherited from the mother, the children never show symptoms of the disease. However, those children can pass it on to their children, who may develop the disease in the future. If inherited from the father, there is a likelihood of developing tumors.

SDHAF2 is a rare mutation that are most associated with head and neck paragangliomas. Like SDHD, it also has maternal imprinting.

Other genetic mutations have been identified over the last years that can predispose one to pheochromocytomas, paragangliomas and other conditions. These include:

How to Get Tested

The fastest way to find out whether you have a genetic mutation is through private testing. You can talk to your local doctor about where to get tested. Testing will cost between $500-2000, and may be covered by insurance, depending on your provider and plan.

We can also do genetic testing if enrolled in our protocol.  However, due to limited funding, we can only offer genetic testing to immediate relatives and to patients with financial need.

What if I'm positive?

If you test positive for a mutation, it is very important to be screened for pheochromocytomas/paragangliomas, even if you are not showing symptoms. Sometimes tumors can be present, but can be biochemically silent (meaning they are not releasing catecholamines) or can be too small to cause symptoms. It is best to catch tumors as early as possible. Screening involves biochemical tests to check for levels of catecholamines and their metabolites, as well as imaging studies, usually a whole body CT or MRI scan.

After the initial screening, we recommend that patients be screened regularly, with biochemical testing yearly (either 24 hour urine or plasma metanephrines and catecholamines) and imaging with CT or MRI from neck through pelvis every 2 years.

More information about the disease, the signs and symptoms, the diagnostic tests, and the treatment options is available here on our website.