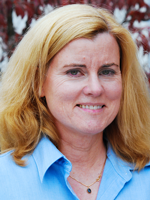 Our overall goal is to understand how iron metabolism is regulated in mammals and in patients with rare diseases, ranging from familial renal cancers, to anemias and polycythemias, and to brain and muscle disorders. In cells, iron regulatory proteins 1 and 2 (IRP1 and IRP2) regulate expression of numerous proteins of iron metabolism. In cells that are iron-depleted, these proteins bind to RNA stem-loops in transcripts known as iron-responsive elements (IREs). IRP binding stabilizes the mRNA that encodes transferrin receptor, and represses translation of transcripts that contain IREs near the 5' end such as ferritin H and L chains. IRP1 is an iron-sulfur protein that functions as an aconitase in iron-replete cells. IRP2 is homologous to IRP1, but it undergoes iron-dependent degradation in iron-replete cells. In mouse models, loss of IRP2 results in mild anemia, erythropoietic protoporphyria, and adult-onset neurodegeneration. Recently, IRP2 deletions and mutations were identified as the cause of early onset neurodegeneration in several patients. These phenotypes are likely the result of functional iron deficiency within neurons and red cell precursors. We are studying the molecular mechanisms that lead to various rare disease phenotypes, and we have developed pre-clinical treatments for the neurodegeneration of Irp2-/- mice, an antisense RNA treatment for ISCU myopathy, bone marrow transplant treatment for patients with heme oxygenase deficiency, and new treatments for renal cancer in patients with hereditary leiomyomatosis and kidney cancer.