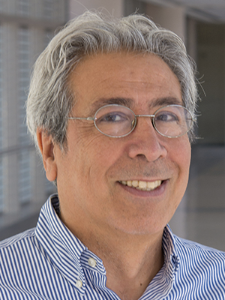 We quantify some biophysical events which occur during tumor-induced angiogenesis. Angiogenesis can be studied at different scales: proteins, cellular and microvascular scale. It starts when large tumors become hypoxic, and secrete growth factors like Vascular Endothelial Growth Factor (VEGF). The uptake of these growth factors by capillaries initiates a sequence of events such as cell migration, cell differentiation and assembly which finally lead to the formation of a capillary network.

There are open questions concerning which form of VEGF actually guides chemotactic migration of cells to form a capillary network, and the roles of the extracellular matrix and matrix metalloproteases (MMPs). Since chemotactic migration is guided by growth factor gradients, we have devised a system of reaction-diffusion equations to model the diffusion, binding, and cleavage of VEGF in vivo. Our simulations show that rapid binding to the matrix leads to short-range gradients of matrix-bound VEGF, whereas slower binding leads to longer-range gradients of matrix-bound VEGF. This is consistent with in vivo observations that the vasculature is much disorganized around tumors that produce the fast-binding isoforms of VEGF. Only the slowly-binding forms of VEGF produce long-range gradients that can guide cell migration to form an efficient and organized network. We also find that the cleaved form of VEGF, removed from the matrix by the action of MMPs, is distributed with a gradient that points away from the tumor, calling into question whether the cleaved form of VEGF plays a chemotactic role in tumor-induced angiogenesis. This is consistent with observations that cleaved VEGF molecules have a weaker chemotactic effect on receptors. Finally, our simulations show that without MMPs a gradient of matrix-bound VEGF cannot be sustained. This is consistent with findings that the production of MMPs by cells near the parent capillary is necessary to initiate the formation of new vasculature.

A major process during angiogenesis is cell migration. We devised a quantitative assay to study cell motility along collagen fibrils. We use a biological film based on collagen I. This film, already devised by researchers at NIST, provides a reproducible surface where the topology can be studied with precision; however, cells on top of this film have the same behavior as in a complex 3-dimensional in vivo matrix. By modifying the drying step, we were able to produce thin monolayers of collagen fibrils with consistent orientations over macroscopic (>100 micron) distances. From a digital image of the collagen film, we have devised a quantitative method based on 2D Fourier transform to decompose the image and using a pass band filter to eliminate the noise. The result is an image in the frequency space and the distribution of the amplitude versus the angle gives the main orientation of the fibrils. We also conducted experiments with vascular endothelial cells, and found that cell orientation and migration are well-correlated with fibril orientation (figure 1). Using polarized cells, we showed oriented thin collagen film induces natural migration along the fibrils without using any sort of attractor. Taken together, these results demonstrate additional functionality and physiological relevance for a class of films being successfully applied in a variety of cell biology experiments. We are continuing our studies to characterize the reorganization of the cytoskeleton of different cell line (endothelial and epithelial) in contact of this thin film. In addition of classical immunostaining, we have labeled microtubules in living cell by incorporation of a GFP- -tubulin fusion protein into microtubules which leave them highly motile. Live images of cells show us the reorganization of the cytoskeleton along these fibers while the cell locomotion. 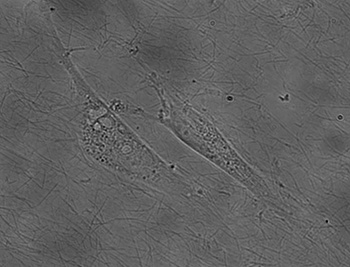 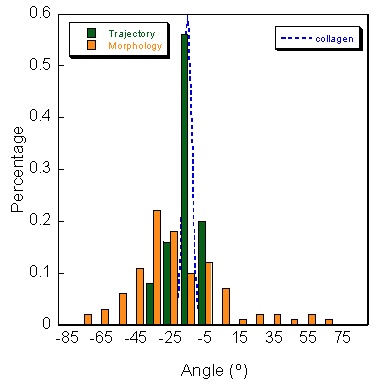 Morphology of endothelial cell seeding on an oriented collagen film

To study the network formation of endothelial cells (EC) in an Extra-Cellular-Matrix (ECM) environment, we have devised an EC aggregation-type model based on a diffusion-limited-cluster-aggregation model (DLCA), where clusters of particles diffuse and stick together upon contact. We use this model to quantify EC differentiation into cord-like-structures by comparing experimental and simulation data. Approximations made with the DLCA model, when combined with experimental kinetics and cell concentration results, not only allow us to quantify cell differentiation by a pseudo diffusion coefficient, but also measure the effects of tumor angiogenic factors (TAF) on the formation of cord-like structures by ECs. We have tested our model by using an in vitro assay, where we record EC aggregation by analyzing time-lapse images that provide us with the evolution of the fractal dimension measure through time. We performed these experiments for various cell concentrations and TAF (EVG, FGF-b, VEGF...). During the first six hours of an experiment, ECs aggregate quickly. The value of the measured fractal dimension decreases with time until reaching an asymptotic value that depends solely on the EC concentration. In contrast, the kinetics depends on the nature of TAF. The experimental and simulation results correlate with each other in regards to the fractal dimension and kinetics, allowing us to quantify the influence of each TAF by a pseudo diffusion coefficient. We have shown that the shape, kinetic aggregation, and fractal dimension of the EC aggregates fit into an in vitro model capable of reproducing the first stage of angiogenesis. We conclude that the DLCA model, combined with experimental results, is a highly effective assay for the quantification of the kinetics and network characteristics of ECs embedded in ECM proteins. Finally, we present a new method that can be used for studying the effect of angiogenic drugs in in vitro assays.

Aggregation of endothelial cells at three different time points (0h, 2h and 4h). The cells are seeded on matrigel and aggregate to each other in a specific pattern

Growth factors distribution, MMP release, cell migration, differentiation and aggregation are major component of tumor induced angiogenesis. In this part, we have modeled it; our model includes these phenomena but also the interaction of endothelial cells (ECs) with the extracellular matrix (ECM). Indeed, ECs switch between growth, differentiation, motility, or apoptotic behavior in response to the local topology and composition of the ECM. Assuming the ECM medium as a statistically inhomogeneous medium (some area support sprout growth, some not), we show that the ECM can be a natural barrier to angiogenesis. We study vascular network formation for several ECM distributions and topologies, and we find an analogy with percolation. A threshold exists, under which sprouts cannot reach the tumor. During the growth of the vascular network, a competition exists between the attraction exerted by tumor and the preferred path created by the ECM. We also examined the influence of branching on the tumor vascularization. Branching is a natural phenomenon which helps the tumor become vascularized. By increasing the number of sprouts, the vascular network increases the probability of reaching the tumor, as it can explore more pathways. Our simulations show after two branching events, the vascular network is very likely to reach the tumor. 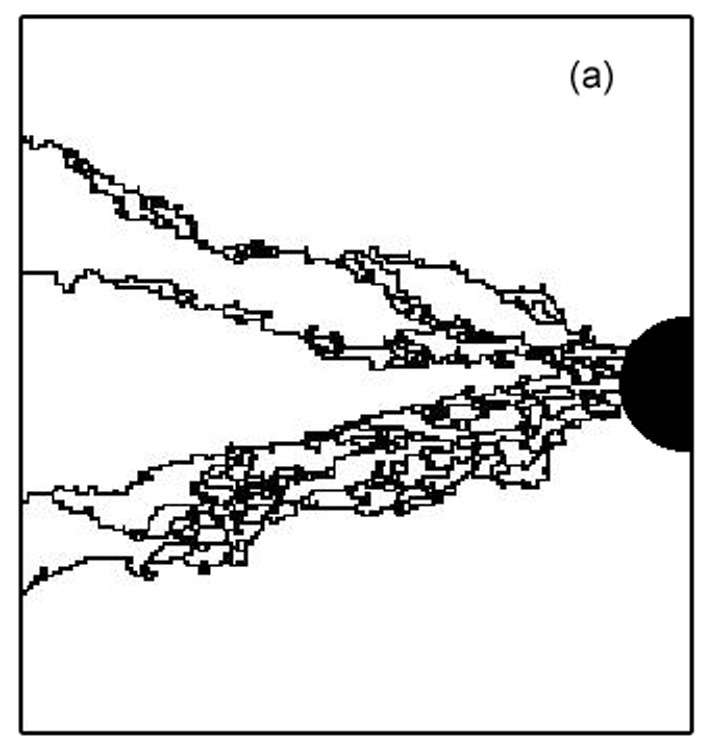 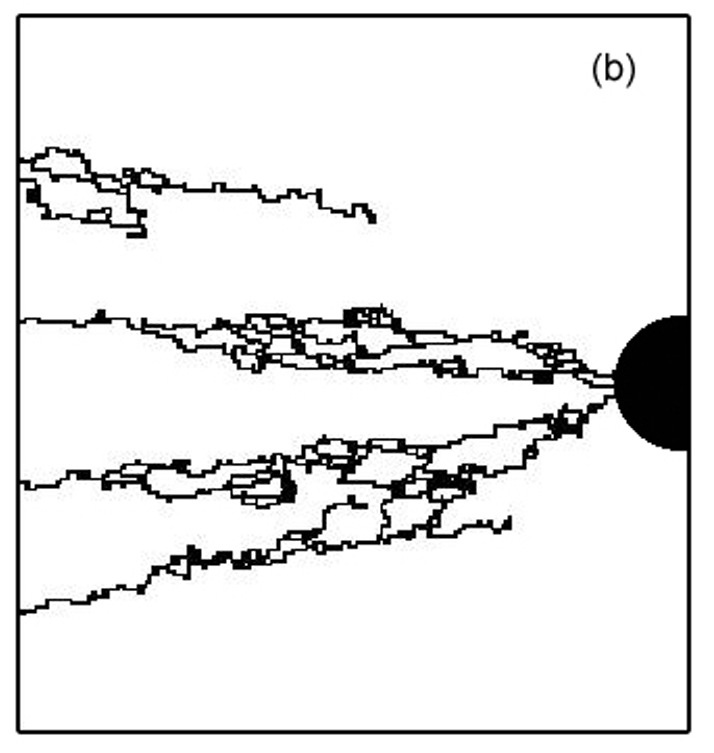 Simulations of a vascular network in ECM for two different surface fractions (f=1 (a) and f=0.9 (b))