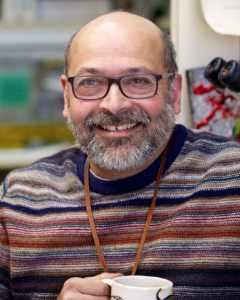 Cells divide, move, adhere and have physical and chemical interactions with their neighbors and their environment to determine the formation of multicellular organ systems with unique fates, morphologies, function and behavior. Our broad goal is to understand how such interactions determine pattern and the self-organization of cell communities in the nervous system of the zebrafish embryo.

The lateral line is a mechanosensory system that helps determine the pattern of water flow over the fish and amphibian body. It consists of sensory organs called neuromasts that are distributed in a stereotypic pattern over the body surface. Each neuromast has sensory hair cells at its center and these sensory cells are surrounded by support cells, which serve as progenitors for production of more hair cells during growth and regeneration of neuromasts. The development of this superficial sensory system in zebrafish is spearheaded by the posterior lateral line primordium, a group of about 140 cells that migrates collectively under the skin from near the ear to the tip of the tail. As its cells move in a cohesive column, they divide and reorganize to form nascent neuromasts that are deposited sequentially from its trailing end. Their journey is easily observed in live transgenic embryos with fluorescent primordium cells. Furthermore, a range of genetic and cellular manipulations can be used to investigate gene function and morphogenesis in this system.

Understanding the self-organization of this relatively simple and accessible system in zebrafish serves as a model to elucidate the broader principles that determine cell fate specification, morphogenesis and collective cell migration in the developing vertebrate nervous system.