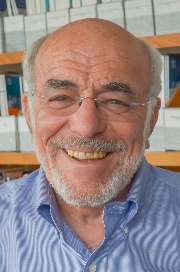 In the Section on Neuroendocrinology, led by David Klein, signal transduction in the pineal gland is studied, with primary focus on the biochemistry and molecular biology of the first enzyme in the serotonin-melatonin conversion pathway, serotonin N-acetyltransferase (arylalkylamine N-acetyltransferase, AANAT, EC 2.3.1.87). The production of melatonin is increased at night in all vertebrates due to a marked increase in AANAT activity in the pineal gland. As such, AANAT plays an essential role in vertebrate physiology in translating darkness into a circulating signal. Melatonin is also synthesized in the vertebrate retina, where it appears to enhance dark adaptation.

The gene encoding of AANAT in several vertebrate classes has been sequenced. Studies on the rat promoter of the AANAT gene have made it possible to identify elements involved in the tissue-specific expression of AANAT. With this information, it has been possible to construct a transgenic rat that expresses a reporter under the control of the AANAT promoter in the pineal gland and retina, on a day/night basis. The analysis of AANAT genes has resulted in the identification of a new AANAT gene subfamily: AANAT-2, recently discovered in fish. AANAT-1 (the well-studied form) and AANAT-2 differ in tissue distribution, kinetics, and circadian rhythm patterns. Each may have evolved to meet different demands for melatonin synthesis in the pineal gland and retina. The biology of AANAT-2 will be studied in the future. A major step forward has been the development of a new cell line expressing human AANAT. This has had a major impact on research, with the most important advance being evidence indicating a new level of regulation of AANAT activity through an activation/inactivation mechanism.

Regulation of AANAT Activity. The regulation of mRNA encoding the enzyme is being studied, and the gene sequence is being used to generate proteins and peptides to use as antigens to raise antisera against the protein. Thus, it has been found that transcriptional mechanisms play a regulatory role in controlling melatonin production in some, but not all, species. However, it is becoming clear that, in all species, a common mechanism regulating AANAT activity is second-messenger control of proteasomal proteolysis. This mechanism appears to play a central role in producing the rapid light-induced decrease in AANAT activity and melatonin production. It is of interest that, in different vertebrate classes, light acts through different mechanisms, but that regulation of AANAT through proteasomal proteolysis is common to all.

Structure of AANAT. We are interested in a biochemical and physicochemical analysis of AANAT, and have determined the mechanism of catalytic action using the expressed protein. Site-directed mutagenesis indicates that one or more histidine residues located between the putative arylalkylamine binding domain and a putative CoA binding site represent the catalytic domain. X-ray crystallographic analysis has established the three-dimensional structure of an active form of AANAT.