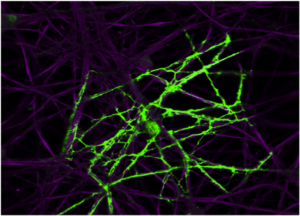 Myelin, the multilayered membrane of insulation wrapped around nerve fibers by glial cells (oligodendrocytes), is essential for nervous system function, increasing conduction velocity at least 50-fold. Myelination is essential for brain development. The processes controlling myelination of appropriate axons are not well understood. Myelination begins late in fetal life and continues through childhood and adolescence, but myelination of some brain regions is not completed until the early twenties.

Our research shows that neurotransmitters are released along axons firing action potentials. The neurotransmitters activate receptors on myelinating glia (Schwann cells in the peripheral nervous system and oligodendrocytes in the central nervous system) as well as astrocytes and other cells that, in turn, release growth factors or cytokines that regulate the development of myelinating glia.

In addition to effects of impulse activity on proliferation and differentiation of myelinating glia, we determined that release of the neurotransmitter glutamate from vesicles along axons promotes the initial events in myelin induction. The process involves stimulating the formation of cholesterol-rich signaling domains between oligodendrocytes and axons and increasing the local synthesis of the major protein in the myelin sheath, myelin basic protein, through Fyn kinase–dependent signaling. Such axon-oligodendrocyte signaling would promote myelination of electrically active axons to regulate neural development and function according to environmental experience. The findings are also relevant to demyelinating disorders, such as multiple sclerosis, and to remyelination after axon injury.

The release of neuronal messengers outside synapses has broad biological implications, particularly with regard to communication between axons and glia. We identified a mechanism for nonsynaptic, nonvesicular release of ATP from axons through volume-activated anion channels (VAACs)—activated by microscopic axon swelling during action potential firing. The studies combine imaging of single photons to measure ATP release in a luciferin/luciferase assay with imaging of intrinsic optical signals and intracellular calcium, time-lapse video, and confocal microscopy. Microscopic axon swelling accompanying electrical depolarization of axons activates the VAACs to release ATP. Such nonvesicular, nonsynaptic communication could mediate various activity-dependent interactions between axons and nervous system cells in normal conditions, development, and disease. 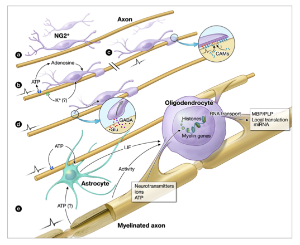 Impulse activity in axons regulates oligodendrocyte development and myelination at several stages and via different signals. (A) Immature OPCs (NG2+ cells) in white matter on an electrically silent unmyelinated axon. Such cells persist in significant numbers in the adult brain. (B) Electrical activity causes ATP release from axons, which generates adenosine that stimulates differentiation of NG2 cells to a mature oligodendrocyte, and promotes myelination. K+ is released from electrically active axons. Blocking K+ channels in oligodendrocytes in culture has been shown to regulate oligodendrocyte proliferation and lineage progression. (C) Electrical activity can also alter the expression of cell adhesion molecules on the axon that are involved in initiating myelination. This has been shown to regulate myelination by Schwann cells in the PNS, but the same molecule (L1-CAM) is involved in myelination by oligodendrocytes. (D) The release of the neurotransmitters Glu (glutamate) or GABA from synapses formed on NG2 cells, could provide another mechanism to regulate myelination in response to functional activity. (E) After NG2 cells differentiate into oligodendrocytes, ATP released from axons firing action potentials stimulates the synthesis and release of the cytokine LIF from astrocytes, which promotes myelination. Myelination during development and postnatally may be regulated by several other unidentified activity-dependent signaling molecules affecting development of oligodendrocytes and myelin formation. Electrical activity in axons, via the release of neurotransmitters, ions and ATP may influence gene expression in oligodendrocytes by histone modification, RNA transport, local translation and regulate mRNA stability and translation by miRNAs. 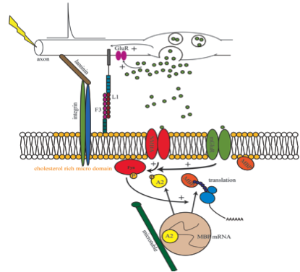 A schematic diagram of the axon-oligodendrocyte signaling complex formed at cholesterol-rich microdomains. Fyn kinase is a major integrator of axon-derived signals. The present experiments show that action potential-induced vesicular release of glutamate from axons promotes the formation of cholesterol-rich microdomains, as evidenced by increased trafficking of the transferrin receptor into the membrane, co-localization of the transferrin receptor with phospho-Fyn kinase, increased surface expression of L1CAM, phosphorylation of Fyn kinase, and local translation of MBP, which was dependent on Fyn kinase, after electrical stimulation. These effects are blocked by stimulation when vesicular release from neurons is blocked with BnTX.

Single-photon imaging was used to detect the release of ATP. ATP was detected by adding the firefly proteins (luciferase and Luciferin) that generate light in the tail of a firefly to cultures of mouse sensory neurons. The reaction that generates light requires ATP, so that when ATP is released from a neuron when it fires electrical impulses, a flash of photons is seen.