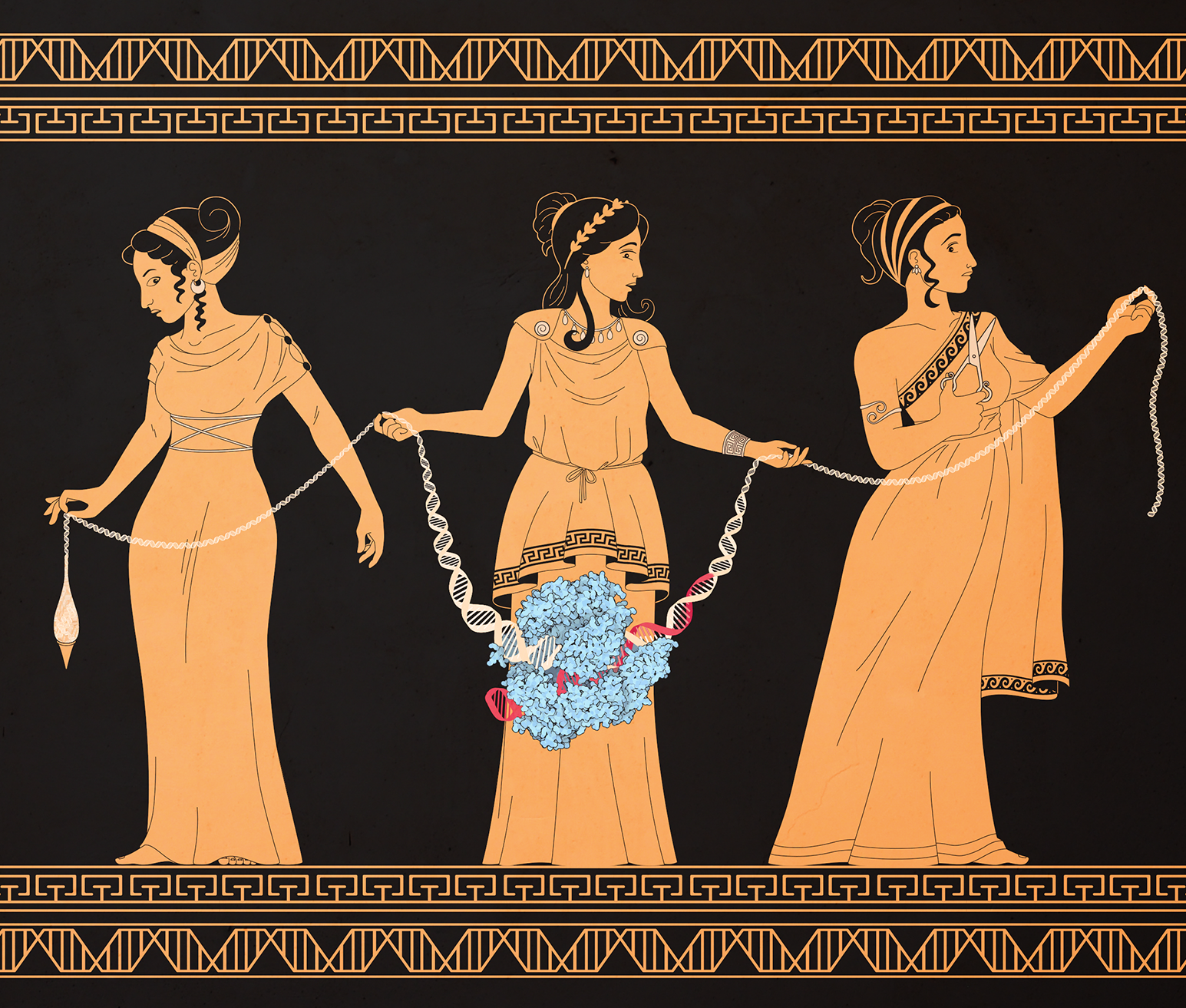 In ancient Greek mythology, the three Fates determine the destiny of all mortals. These Goddesses stood in the backdrop, with DNA in hand, as staff and scientists gathered on January 31, 2019, to discuss how genome editing is allowing mortals to change destiny too. The four NICHD Exchange speakers explored the benefits and risks of a DNA editing technology known as CRISPR/Cas9. They focused on multiple topics, including the historical timeline of gene editing, examples of CRISPR in use at the NICHD, and the legal and moral implications of editing someone’s genome.

CRISPR/Cas9 is a genome editing method that has been co-opted from the immune system of bacteria, requiring two major components: CRISPR and Cas9. Shorthand for Clustered Regularly Interspaced Short Palindromic Repeats, CRISPR DNA encodes small chunks of RNA, whereas Cas9 is a protein that cuts DNA. The encoded RNA is used to target Cas9 to viral genes for destruction in bacteria. But in the lab, scientists design custom CRISPR RNAs to target genes of interest.

When injected into living cells, the customized CRISPR/Cas9 complex seeks an exact match in the genome where it makes a double stranded cut, taking a target gene out of commission. Scientists have created modified versions of this system to instead fix and repair genes as well. The applications for this technology are far reaching.

A historical look at how we arrived at current genome editing techniques can offer insight into where these cutting edge methods might lead in the future. Dr. Tim Petros, principal investigator in the NICHD Unit on Cellular and Molecular Neurodevelopment, kicked off the meeting with his talk “Splicing & Dicing: The Future of Gene Editing.” He presented a brief history of genome modification and the decades of research at its foundation.

Today, most students know what DNA looks like by the end of a basic biology class. But before the early 1950s, no one did. Even with the helical structure in hand, scientists took more than a decade to discover how to cut and paste DNA with restriction enzymes and ligases. We didn’t gain the skills needed to copy and sequence DNA until, as Dr. Petros termed it, “the birth of molecular cloning.” This was a necessary step to understanding homologous recombination, our first peek at DNA editing. Eventually, scientists began to pursue more efficient ways to modify DNA: meganucleases, zinc finger nucleases, and TALEN entered the scene.

Humanity entered an era of reprogramming the living world around us. Dr. Petros presented a taste of our newfound ability, including food supply modification, livestock improvements, pathogen reduction, biofuel production, and human disease and treatment research.

Over the past two decades, the introduction of CRISPR/Cas9 has had an undeniable impact on the pace of research. The number of CRISPR/Cas9-containing studies published between 2005 and 2018 has grown at an astonishing rate, from just a few to several thousand. In 2013, the scientific community witnessed the first use of the CRISPR system in mammalian cells.1 Just a year later, monkeys entered the world harboring CRISPR/Cas9 targeted mutations.2 And today, multiple biotech companies are heavily invested in CRISPR technology, with ongoing Phase 1 clinical trials using CRISPR/Cas9 to treat human diseases.

The historical achievements in genome editing have led to CRISPR/Cas9 playing a major role in basic science research worldwide. The second presenter of the meeting, Dr. Mary Dasso, senior investigator in the NICHD Section on Cell Cycle Regulation, shared the benefits of CRISPR/Cas9 in her work. During her talk “Trial in Absentia: Using Gene Editing to Understand Nucleoporin Function Through Regulated Degradation,” the audience learned about CRISPR/Cas9’s impact on her lab’s research scope and pace of progress.

Dr. Dasso uses CRISPR/Cas9 to study communication between the cytoplasm and nucleus. Her group focuses on the nuclear pore complex, “a hub of biological regulation” that is composed of multiple proteins called nucleoporins. Unfortunately, removing nucleoporins to study their function can affect cellular activities essential for survival, making research difficult. Adding to the complexity, Dr. Dasso aims to study most, if not all, nucleoporins. Creating a knock-out model for each protein is beyond the scope of a single lab—without CRISPR/Cas9 that is.

Dr. Dasso’s lab uses an elegant CRISPR-based system to study each protein within the complex without disrupting all cellular function. The team can modify any protein to include a tag that allows for inducible and targeted destruction of individual nucleoporins within two months. What makes this work exceptional is that the lab uses CRISPR/Cas9 to make genetic modifications at a scale and pace previously unseen. The progress was evident, revealing some surprising roles of nuclear pore members in chromosome organization and transcription.

The CRISPR system permits greater research scope and speed, but also brings in unique legislative restrictions when used in humans. Dr. Stuart Moss, a health scientist administrator in the NICHD Fertility and Infertility Branch, highlighted the legislative concerns of using CRISPR/Cas9 in human research in his talk about male infertility, “Men Are Not so Simple: So Many Spermatogenic Genes, so Little Time (To Knock Them Out).”

Male infertility is complex. Between one to two thousand genes are involved in spermatogenesis (that’s somewhere between five to ten percent of the human genome!). With so many genes involved, fertility can be affected due to disruptions to diverse aspects of development. Ongoing CRISPR/Cas9-based studies in mice are addressing one gene at a time. But while research in mice goes ahead, treating male infertility in humans brings with it additional complexity.

At this point in his talk, Dr. Moss switched gears from model system genetics to the legislative restrictions of gene editing technology in humans. There are two types of gene therapy: somatic cell and germline gene therapy. Human somatic cell gene therapy is allowed by the National Institutes of Health (NIH), and a common fund program has dedicated 190 million dollars over six years to its study. However, gene editing of human germline cells is different. Dr. Moss cited a legislative amendment rider (the Dickey-Wicker amendment) that prohibits the use of federal funds to create, destroy, discard or injure human embryos for research purposes. This regulation effectively prevents any research on human germline gene editing from receiving federal funding in the United States.

Dr. Moss also addressed the concern of privately funded human germline research. He explained that another amendment rider prohibits the FDA from reviewing or approving applications that include the creation or modification of human embryos with a heritable genetic modification. The combination of this and federal funding restrictions effectively prohibits germline gene therapies from being administered by any entity in the United States.

Given the germline’s involvement in fertility, and current legislative restrictions, researchers need to carefully design how they study and treat male infertility. Dr. Moss asked the question directly—can you fix male fertility without changing the germline? “The easy answer is no,” he said. But gene editing still has a place in male fertility research; not all infertility stems from germline problems. For example, researchers can use gene editing to address somatic cell defects, a non-germline contributor to infertility.

Dr. Moss’ discussion on infertility research highlighted the complexity of gene editing technology use in humans. Dr. Melissa Parisi, chief of NICHD’s Intellectual and Developmental Disabilities Branch, wrapped up the meeting by continuing the discussion on genome editing’s benefits and risks. Her talk, “Gene Editing to ‘Fix’ Heritable Disorders in Children: Opening Pandora’s Box,” included applications of genome editing for specific genetic diseases, and concerns about this rapidly evolving technology. 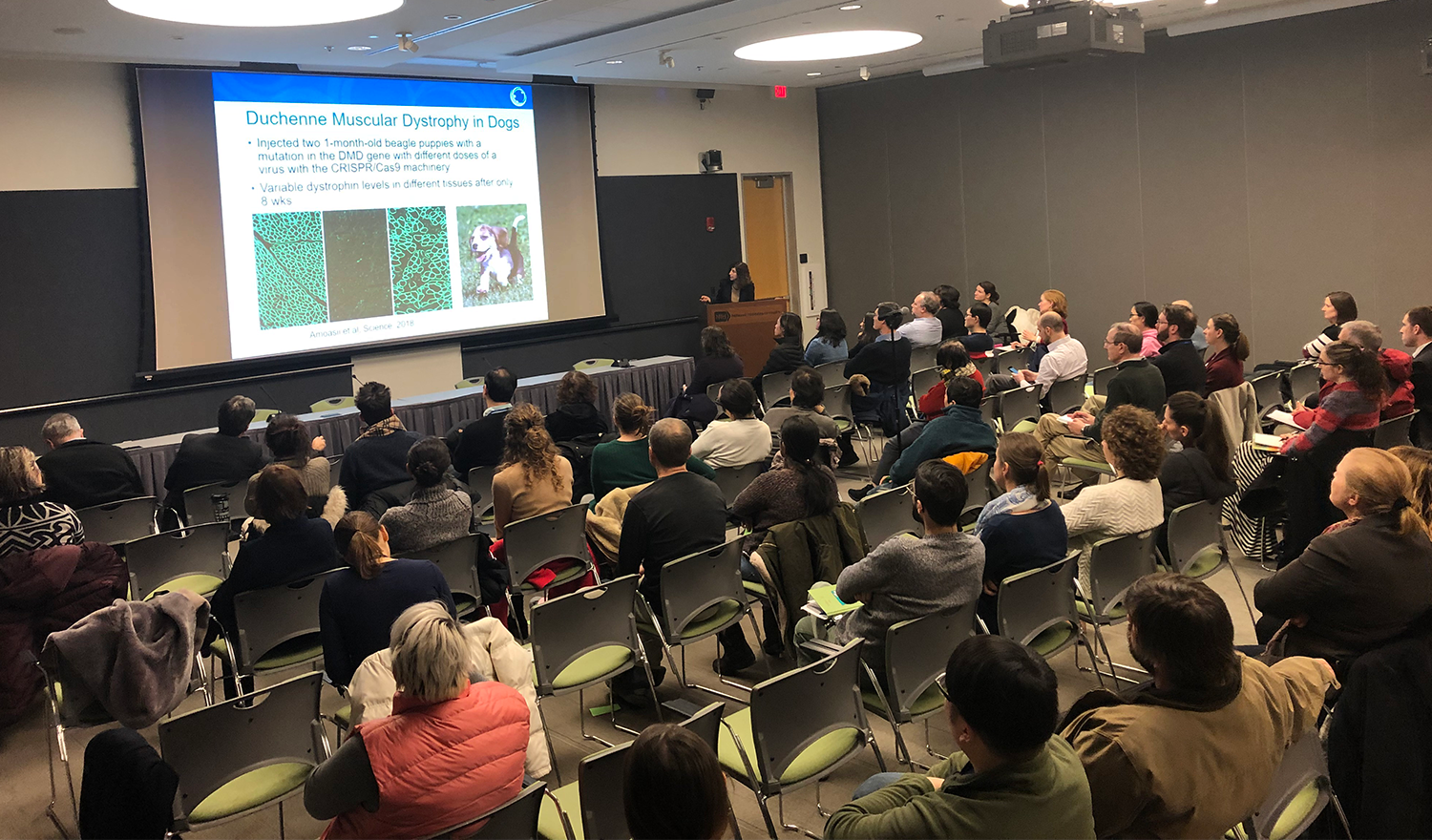 Dr. Parisi presented multiple gene-editing success stories, but one stood out: a 2018 study using CRISPR/Cas9 to correct a Duchenne Muscular Dystrophy mutation in one-month-old Beagle puppies.3 Upon CRISPR/Cas9-mediated therapy, the researchers observed tissue-dependent changes in dystrophin levels after only eight weeks. This included restoring dystrophin up to a striking 92% of normal levels in cardiac muscles. Studies like this in large animals suggest the potential clinical utility of gene editing in humans.

Although the benefits of genome editing are no doubt impressive, there are risks. Dr. Parisi offered a sobering reminder that gene therapy treatments aren’t always ideal. For one, genetic modifications might not be precise, creating off-target effects that could lead to unintended biological issues. In addition to unexpected effects, we must consider that a newfound ability to alter genes might create an “ethical slippery slope.”

We are nowhere near understanding the long-term consequences, both biological and societal, of using CRISPR to affect change in the human genome. This makes it all the more serious that a scientist in China has allegedly created genome-edited human babies using CRISPR, an act that triggered a response from the NIH Director, Dr. Francis Collins.

The scientific community must find a way to balance the benefits and risks of human genome editing as we move forward with new technologies. To address these real concerns and at the same time bolster progress in genome editing, the NIH created the Common Fund Somatic Cell Genome Editing (SCGE) Program. By facilitating interactions between invested parties, the SCGE Program aims to improve necessary components in genome editing research, such as genome editing reagents, better animal models, and enhanced in vivo delivery tools. In addition, the program proposes an assessment of unintended biological effects and the coordination of partnerships to disseminate information.

Dr. Parisi ended her talk on a note of hope, not despair. With ample support for the scientific community and proper regulations in place to guide the way, we can mitigate the risks of genome editing and reap the rewards.

At the conclusion of the event, NICHD Director Dr. Diana Bianchi celebrated that genetics has gone from a diagnostic focus to one of treatment. She shared an impactful experience of hearing a grandmother talk about losing her first grandchild to muscular dystrophy, but then seeing her second grandchild treated and walking. “It’s such a timely topic…incredibly timely topic,” Dr. Bianchi emphasized to the crowd. We are neither gods nor goddesses, but with the emergence of genome editing tools like CRISPR/Cas9, we cannot deny that our fate is in our own hands.