NICHD Exchange Recap: “What to Expect When You’re Expecting…and Medicating: Medication and Drug Use During Pregnancy” 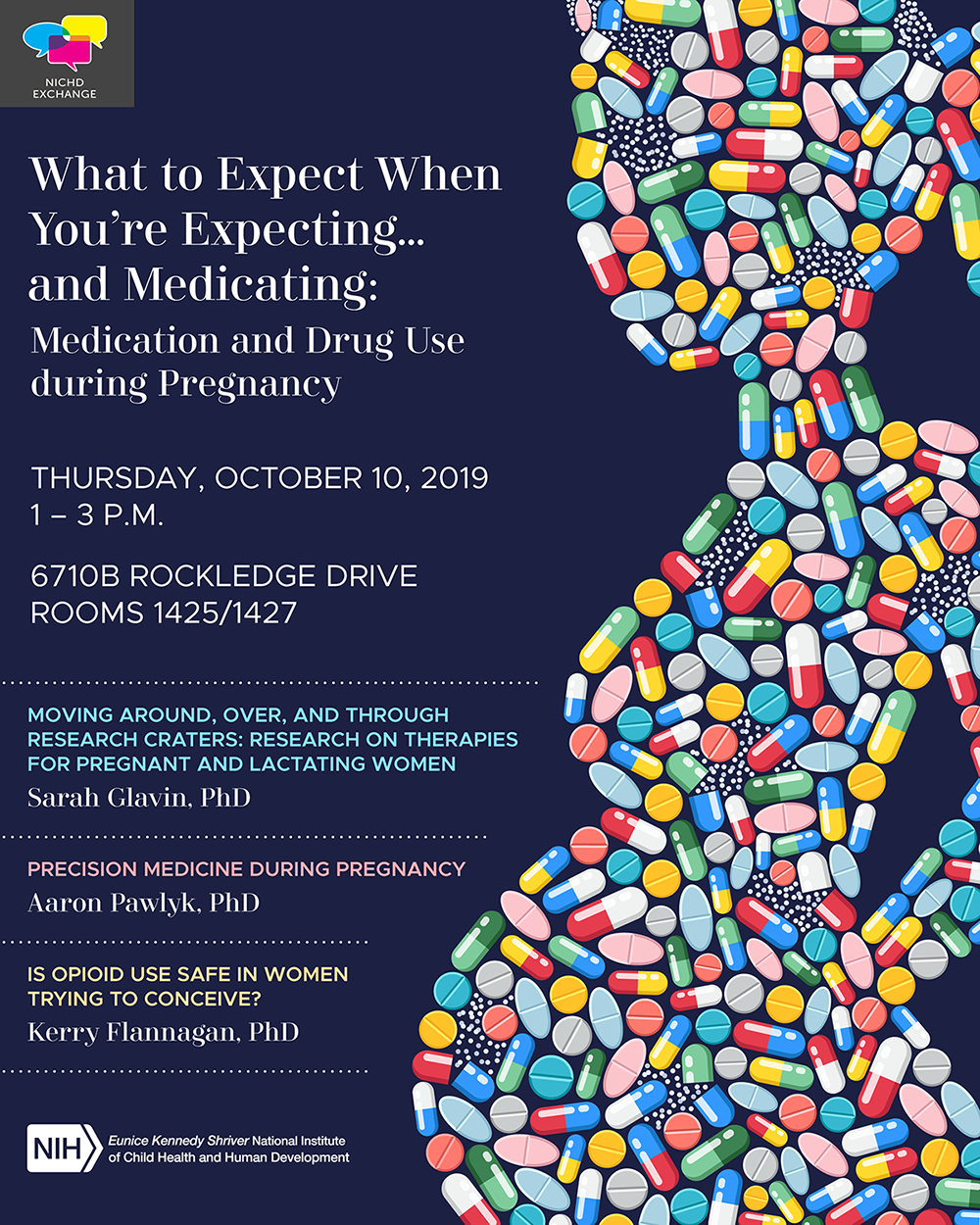 Pregnant and lactating women can be bombarded with advice on what to do during pregnancy. Eat this, but not that. Exercise enough, but not too much. Yet, when it comes to medicine use during pregnancy, sometimes advice is limited. Historically, there have been drugs with unpredicted effects in pregnant women—such as thalidomide, a drug used for morning sickness that caused absent or shortened limbs in thousands of infants. Despite this, a mechanistic understanding of how drugs influence physiology during pregnancy is sparse. On October 10, 2019, science policy analysts, researchers, and physicians gathered for the NICHD Exchange meeting to discuss this issue.

The first speaker was Dr. Sarah Glavin, the deputy director of the NICHD Office of Science Policy, Reporting, and Program Analysis. She highlighted the reality that many pregnant women take medications for both chronic and episodic health conditions throughout their pregnancies. According to Dr. Glavin, 97% of women take one or more medications during pregnancy, and over 30% of women take more than five. Despite the large proportion of pregnant women taking medication, the data describing the health benefits or possible dangers on both maternal and fetal health is largely unknown. Often, pregnant women must balance an unknown risk of treatment with an unknown risk of the disease on both themselves and their fetuses.

Dr. Glavin and her colleagues sought to estimate the scope of this issue. They participated in a Health and Human Services (HHS) wide task force that reviewed over 25,000 publications to quantify research, identify gaps, and determine funding sources. They found that many of the studies they catalogued were not primary research articles, rather a large number were reviews of primary data. Furthermore, studies on pharmacodynamics (what the drug does to the body) and pharmacokinetics (what the body does to the drug) were specifically lacking. These mechanistic studies are required to determine safety and efficacy of pharmacological therapies. Studies on other pregnancy-specific conditions, such as lactation and placental transport, were similarly deficient. While Dr. Glavin and colleagues set out to identify gaps in the research, they instead found craters.

The discussion then turned to how these sparse studies on maternal and fetal pharmacology are funded. Historically, NICHD has led all other institutes at NIH in investing research funds for grants and personnel in this field. Raising awareness for the large and immediate need for research in this area is an important first step. Ideally the future will bring great strides in understanding pharmacology use surrounding pregnancy in a modern and focused way.

The second speaker was Dr. Aaron Pawlyk, the new branch chief of the NICHD Obstetric and Pediatric Pharmacology and Therapeutics Branch, who suggested filling research craters with precision medicine for maternal health. Precision medicine focuses on treating each individual’s unique factors and physiology.

The factors that alter our responsiveness to pharmaceuticals can range from our genetic code to the larger environment we live in. A call for a greater focus on precision medicine in pregnant and lactating women is indeed timely. Historically, pregnant and lactating women have been excluded from most clinical trials, despite the fact that they are often prescribed pharmaceuticals for various conditions. Recent efforts applying precision medicine to pregnancy-related conditions, such as gestational diabetes and preeclampsia, have yielded promising results.

The final speaker was Dr. Kerry Flannagan, a postdoctoral fellow in the NICHD Epidemiology Branch in the Division of Intramural Population Health Research (DIPHR). Dr. Flannagan discussed a recent study she conducted investigating the effects of opioid use on fertility. This project included data from over 1,200 women. While other studies focus on abuse or opioid addiction, Dr. Flannagan sought to understand the effects of episodic opioid use (or even a single exposure) in non-addicted women who were trying to conceive. For many women, episodic use may involve opioid use to manage pain from previous lost pregnancies or use of cough syrup for treating cold symptoms.

Dr. Flannagan’s study concluded that episodic opioid uses during the preconception time period decreased fecundity and decreased the rates of live births compared to women who were not exposed to opioids. These are the types of primary research studies in pregnant women that are needed, but historically have been limited.

The purpose of the NICHD Exchange series is to bring together members of the institute from diverse backgrounds to facilitate communication and collaboration on significant and current topics. To this end, the Exchange meeting was a success. Dr. Glavin quoted Malala Yousafzai who famously stated: “When the whole world is silent, even one voice becomes powerful.” Physicians and researchers working in extramural and intramural NICHD can continue to fill the large craters in our understanding of drug use effects during pregnancy.