The Arts: What’s a Vector, Victor?

So you're putting together a research poster, and it's going great! Your content is well written and concise. Your figures are attractive and clear. The science is solid.

But the institute logos at the top of your poster look low-resolution. Blurry. Pixelated. And the background color doesn't match the rest of your poster. In short, it looks unprofessional. But what else can you do? That's the best you've got. Right?

Not so fast! Take a few minutes to learn the difference between raster and vector graphics and avoid the pain of an amateurish poster. 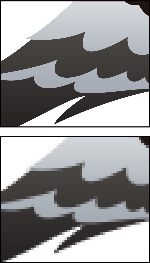 Demonstrating the scalability of vector (top) versus raster (bottom)

Raster graphics are composed of a grid of dots, known as pixels, each with its own color value. Popular programs include Adobe Photoshop, GIMP (free, open-source), and PaintShop Pro. Commonly used raster file formats are .jpg/.jpeg, .png, .tiff, .gif, .bmp, and .psd (a proprietary Adobe format).

PROS: Raster formats are perfect for photos and other highly detailed images because they provide a richer depth of color. They also allow for very precise pixel-by-pixel editing.

CONS: Because the computer has to account for each individual pixel, high-resolution raster files are larger in size. Editing them can be memory-intensive.

In addition, raster images are resolution-dependent—in other words, resizing them (particularly enlargement) can lead to a loss in clarity. Programs such as Photoshop are getting better at enlarging raster graphics with a minimum of degradation, but it's far from perfect.

Vector graphics, on the other hand, are made of paths, each with a mathematical formula that dictates shape, fill color, and stroke. File formats include .svg, .eps, .pdf, and .ai (a proprietary Adobe format). Favorite programs of designers and illustrators include Inkscape (free, open-source) and Adobe Illustrator.

PROS: The biggest benefit of working with vectors is their scalability. Because they are calculated mathematically, they are infinitely resizable without any loss in clarity. For the same reason, because the computer doesn't have to account for every pixel, they are comparatively small in file size.

Unlike most raster formats, vector files aren't flattened, meaning that every line and shape in a vector graphic is a distinct editable object. It's also quite simple to have a transparent background without being concerned about jagged edges. 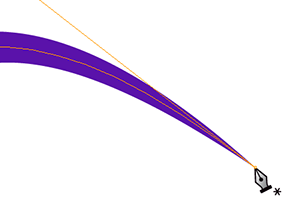 The pen tool can be used to create lines, curves, and shapes by connecting anchor points in a vector graphic.

CONS: Creating vector graphics requires some degree of skill. It's not as simple as just opening a previously existing photo. Vectors have to be created by someone with a general knowledge of the software.

While it is possible to achieve incredibly detailed, near-photo-realistic vector images, they generally can't display the color depth of raster images. Such intricate vector illustrations, due to the complex algorithms involved, can also be quite memory-intensive to work with (and you pretty much have to be a wizard to create one).

Logos, on the other hand, aren't very complex and are limited to a handful of colors. They are perfectly suited for vector—which brings us back to that sad, blurry institute logo on your poster. For logos (and any simple charts and graphs), use vectors when possible. If you're designing your poster in PowerPoint, bear in mind that PowerPoint  doesn’t support .svg files, so you will need to convert them to either .eps (Encapsulated PostScript) or .emf (Enhanced Windows Metafile) formats. This can be done easily in either Adobe Illustrator (which many labs now have) or Inkscape, a free open source vector program for Windows, Mac OS X and Linux.

Once you've traded in your old, blurry raster logos for ones made from clean, crisp vector paths, your poster will look much snazzier, guaranteed!

For help with graphics of any kind, raster or vector, please don't hesitate to contact me at jonasnic@mail.nih.gov.

The NIH adopted a new logo in 2012, unifying all Institutes and Centers under one visual identity and replacing the old individual IC logos. Current IC logos consist of the NIH graphic mark and the name of the Institute or Center written out beside it.